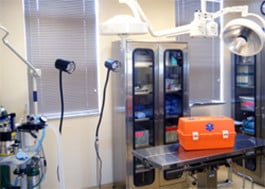 Andre is an adult, male green sea turtle who came to us as a patient on June 15, 2010. A beachgoer named Melissa, and her family found Andre struggling in the surf on the sandbar off Juno Beach. Melissa and her family realized that Andre had sustained serious injuries and went out into the water and brought him to shore. This was not an easy task; Andre weighs 180 pounds and measures more than three feet in length.

Melissa called local authorities who contacted our hospital staff. Melissa Ranly, hospital coordinator, responded to the scene in our sea turtle ambulance and transported Andre back to our veterinary hospital (with the help of concerned beach goers and summer interns).

Upon arrival to the hospital, Dr. Mettee began Andre’s intake examination. All of our patients receive x-rays and blood work, along with physical, neurological, and nutritional assessments. Andre’s injuries were severe and consistent with that of multiple boat strikes. The first boat strike occurred in the posterior region of the carapace and left an area of the turtle’s spinal chord exposed.

Dr. Mettee determined this injury to be two to three months old due to the presence of a mature granulation tissue bed. The second boat strike occurred in the anterior portion of the carapace and was much larger, creating a gaping hole in the carapace leaving the pleura (outside protective lining of the lung) exposed.

Dr. Mettee performed an initial debridement of Andre’s wounds, removing all of the dead bone. In addition to the dead bone, she removed three pounds of sand along with a crab. Initially, Andre was treated with pain meds, antibiotics, and honey packs were applied to the wound site.

Honey is an ancient remedy for the treatment of infected wounds. It has been shown to provide antimicrobial action against a broad spectrum of both bacteria and fungi. Honey is a supersaturated solution of sugars that has a very strong interaction with water molecules; inhibiting the growth of microorganisms. It has also been shown to stimulate key body responses against infection.

KCI has a product called the KCI Vacuum Assisted Closure®, or V.A.C. Therapy System. This system was determined to be the best solution to treat Andre’s wounds. V.A.C. Therapy promotes wound healing through Negative Pressure Wound Therapy (NPWT). The system delivers negative pressure at the wound site through a patented dressing, which helps draw wounds edges together, remove infectious material, and actively promote granulation at a cellular level.

KCI is an amazing and extremely generous company, and continues to provide generous donations of equipment, supplies, time, and resources. KCI’s donations combined with the tireless efforts from Lauren and Letizia have made Andre’s rehabilitation possible.

In addition to the propeller wounds, Andre has begun treatment with antibiotics and an antifungal for a severe infection and pneumonia. Andre’s healing has been remarkable using the V.A.C. system. A second surgical debridement was performed on 07/14; revealing extremely healthy tissue growth.

The V.A.C. system has worked extremely well; negative pressure produced by the system has successfully pulled the lung into place, eliminating the large hole produced by the propeller. The next step would be to reattach the pleura to the carapace and close the wound site.

Saturday, August, 7, Dr. Mettee surgically implanted a biologically active prosthetic inside Andre’s body cavity. The implant, Strattice Reconstructive Tissue Matrix, is porcine derived and designed to promote scar tissue and help attach the lung to the carapace. The implant will grow internally and become a part of Andre.

The surgery was a success. The implant will be monitored for the next six weeks through bandage changes, which occur two to three times weekly. Andre continues to receive treatment from the V.A.C. system 24 hrs a day and is being treated with an antibiotic and an antifungal. Andre is eating very well and his activity level continues to rise daily.

We are all extremely optimistic with regards to Andre’s recovery.