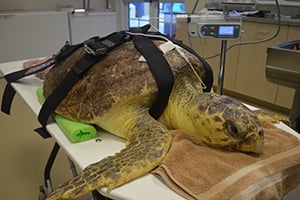 Loggerhead Marinelife Center will release two sub-adult loggerhead sea turtles from its facility off Juno Beach tomorrow morning at 10 a.m. Found at Sandsprit Park in Stuart last December, Roerig was chronically debilitated, anemic and underweight with a large amount of leeches and barnacles on its shell. Fortunately, LMC hospital staff removed the leeches and other parasites by keeping Roerig in fresh water for the first two days. LMC staff also ran total parenteral nutrition (TPN) – a method similar to IV nutrition – on the turtle. After seven months of fluids and antibiotics at LMC, we are excited to announce that the sea turtle is ready to return to the ocean.

Banner was brought into LMC last Sunday after accidentally being hooked at the Juno Beach Pier. The turtle had a single hook in its throat, but because of the quick action of LMC hospital staff, it was removed and Banner was cleared for release.

Roerig and Banner will both be prepared for release from LMC beginning at 10 a.m. One of LMC’s education docents will convey a history of the sea turtles’ journeys and final arrangements to visitors, followed by a procession to the beach for their release into the ocean.