Flashback Friday Part 2: LMC’s Connections to the Past

“If you look closely you can see the white in the Hawksbill’s eye.” said Thomas Dickinson, photographer and volunteer, as he showed me his collection of photos taken at the center. Often, Loggerhead Marinelife Center (LMC) volunteers and staff are asked “why sea turtles?” For some, after noticing the intricate details in the beauty of a sea turtle they are held captive and connected for the rest of time. For others, it may be an intrinsic desire to save a species that knew a planet where dinosaurs roamed. Regardless of the reason, one volunteer encapsulated our connection to LMC the best: “I do what I do because I love the job and sea turtles. Simple as that.”

*Practices displayed in photos are consistent with protocol and regulations of the time the photo was taken. 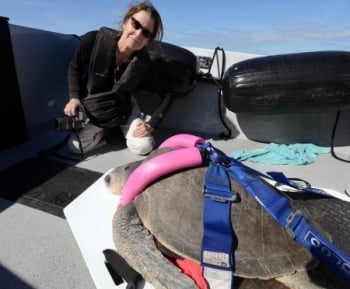 “I have been working in rehab since 2010 when I moved to Tequesta. I am a visual journalist at the Palm Beach Post and I have been helping LMC document their environmental stewardship with my photography.”

Meghan, the sea turtle being released in the photo, was the first olive ridley sea turtle to be found stranded in Palm Beach County. Melanie was a part of Meghan’s entire journey from rescue to recovery. 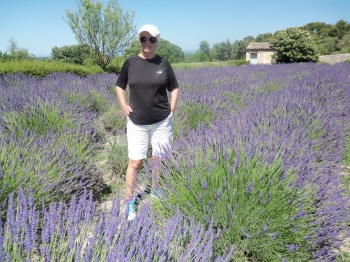 “My name is Evike Boudreau and I have been a volunteer since 2005. I started as a greeter under Larry Woods and worked with Anja Burns, who is an original campus founder. I started in the old facility, in the south parking lot; we only had two trailers and used kiddie pools for our patients. I have always been interested in our wildlife and the environment and was fascinated with the work being done.”

(Pictured right: Evike volunteering as a Greeter in the exhibit hall at LMC.) 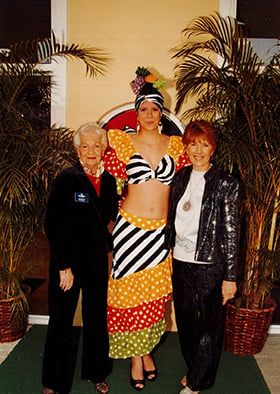 “When my two grandsons were very young they spent summer vacations with me. The Turtle Lady (Eleanor Fletcher) had just been given the old motel office to use for the turtles she had been nursing at her home. Eleanor Fletcher and some friendly volunteers were working out just how to use material that began to appear after news articles were published. My boys loved to see the turtles in the refurbished tanks and watch the stranded babies. At that time, Eleanor did not have anyone to take the little ones out to the Gulfstream so they were taken down to the shore at sunset and released. Not the perfect thing but all she could do at that time. Donations were being accepted and eventually she was able to hire a biologist to begin to shape what is now LMC. Thirty-one years ago was my introduction to what has become a passion for me.

I am a retired teacher. In 1994, I was missing being with children. LMC is in my neighborhood and I became a volunteer. We did everything – taught classes, worked at the tanks when needed and ran the gift shop – nobody had just one job. The Town Council, working with the County Commission, became more involved with the center as it began to grow and the first governing Board was formed. Frank Harris was mayor and Karen Marcus was our commissioner. We were becoming organized. One of my other volunteer jobs was being on the Civic Association Board. There were times when money to buy teaching supplies were tight and I would ask the Association to help.

I believe it was 2004 when I was asked to be on the LMC Board. It was becoming obvious to the Board that the numbers of visitors were continuing to increase and our small area was not able to help the number of hurt turtles. We were beginning to monitor nesting and we were recording the changes in the replenished beaches. We had to expand, so we began our first capital campaign. Thank the Lord for Ray Graziotto. He took a Board that was completely inexperienced and was learning the hard way to the grand opening of LMC.

We had no idea that LMC would, from its opening day, grow so fast. That the innovations in the hospital would be international news. These years have sped by; our incredible staff does double duty often and always gives 110 percent and our second capital campaign has begun. My fascination with these incredible animals continues to grow and I can hardly wait to watch the new buildings take their place on campus so the yard can expand to help more patients.”

“I think everyone who knows me knows I am, have always been, and will always be obsessed with the ocean. When you are raised in South Florida it’s hard to ignore the allure of the ocean. Its depth is unfathomable, it’s vastness is frighteningly beautiful, and the worlds it holds are breathtaking.

I am a 6th generation Floridian native, which means ocean conservation instinctively runs through my veins. Fortunately, I was given two parents and an abundance of family members who are ocean and marine advocates. A fair amount of my family lives within a few blocks from the center. My first memory of LMC was of the old center or as I often referred to it ‘the Turtle Museum’. My mom would stop by the center before or after visiting my grandparents. At the time, I was so young that the tanks were higher than I was tall so my mom or dad would lift me up so I could see the sea turtles. I remember entering a stupor of amazement because it was my first encounter with an ‘exotic’ animal, who had emerged from my favorite place. To this day when I see the sea turtles I feel myself fall into that same stupor.

This experience, in combination with several other marine life encounters, compelled me to work in environmental communication. After interning with LMC, twice in the Marketing and Communications department, I applied for a job as the Marketing and Communications Coordinator. Although I had plenty of ocean experiences before visiting LMC, seeing a sea turtle in person made me realize the connection to the ocean that John F. Kennedy described ‘We are tied to the ocean. And when we go back to sea, whether it is to sail or to watch – we are going back from whence we came.’ And maybe that’s the reason that I will never get tired of watching a sea turtle go home (released).”

(Pictured above: Amanda as an intern with her first #SeaTurtleSelfie.) 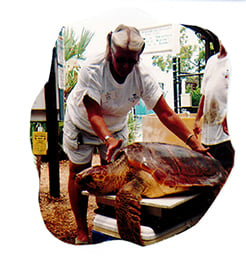 “In 2003, my husband and I were coming to Jupiter on a seasonal basis. Whereas I was on a set vacation schedule, “spring break” as the academic community calls it, he in a law practice could design his own days away from the firm. We had purchased a condo in Jupiter in the late 1990s and we traveled back and forth from Connecticut frequently.

On one rainy day, we were traveling around the Tequesta/Jupiter/Juno Beach area sightseeing and quite by chance came upon the old MarineLife Center tucked away in the southern part of Loggerhead Park.

With my biology degree and passion for plants and animals and knowing that my retirement from private school teaching and administration was in sight, I was allowed to be “incorporated” in the small operation that characterized the center at the time. I spent much of my short vacation breaks in the sea turtle yard, doing what is now a divided task of docenting and rehabbing (the latter then was a job that was strictly dedicated to keeping the tanks clean.) My memory of the old center is clear; a small mobile-home sized building that incorporated some fish tanks (one with the cherished green moray eel), a gift shop that seemed to be a 10 by 10 foot space (always tended by Kate or Anja), several small offices and a poorly designed exhibit room… Again, small and dark and dusty. It took visit number two before I realized that there was even a “yard”  for the sick and injured turtles. There were several round and rectangular tanks that any visitor could step up and lean in towards, a mulch covering on the ground and water being drawn from an aquifer with a very high sulfur content. Because the tanks had no re-circulation of water to speak of on days when the flow was a mere drip, the water was orange and cloudy with an unpleasant odor and it became difficult to even locate the turtle. In spite of these primitive facilities, however, the turtles did recover from their ills. During this time, TurtleFest was conceived and began as a small celebration in the parking lot with not much more than a grill, soft drinks and a keg or two of beer.

As relatively low profile as the center was, however, it drew visitors not only from the local communities, but also from outside of Palm Beach County. To this day, visitors at the center speak of their experiences at the old facility with fond memories – many recalling not only the name of the patients that we treated, but also remembering the exact location of the tank in which the turtle recovered.

As the center grew and moved to our current location, my volunteer time went from dropping in when I was in town to adhering to a set docent schedule as a seasonal Floridian. Finally, I am currently a full-time Florida resident whose volunteer work has spread to the myriad of different projects, events and activities that LMC has developed.” 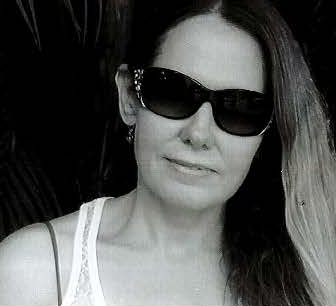 “I found fun and fulfillment at Loggerhead Marinelife Center (LMC). I took a volunteer position as a greeter at LMC, a non-profit organization located in beautiful Juno Beach, Florida. A talented veterinary staff treats sick and injured sea turtles and then returns them back into the ocean. There’s a cute gift shop and lots of cool activities for both kids and adults. LMC also has an education room with fish tanks and displays featuring many types of sea animals. One notable exhibit is the Archelon, a replica of a giant prehistoric turtle.

While volunteering at LMC, I met interesting people from all over the world, got to measure an adorable baby hatchling to determine its age and participated in the release of one of our patients, Captain Jack, a green sea turtle.

Additionally, I was part of several community beach cleanups sponsored by the Blue Friends Society of Loggerhead Marinelife Center, a conservation group. Cleaning our coastline fights pollution and helps protect the health of people and animals.

At LMC, I also met inspirational people with different types of disabilities who are facing adversity and overcoming obstacles. I worked as a greeter with Joe who suffers from cerebral palsy. In spite of his physical challenges, he expresses his passion for music by playing guitars. ‘I never say I can’t accomplish something unless I’ve tried,’ he tells me.”

(Pictured above: Kerstyn at a beach clean up in Delray Beach, Florida)