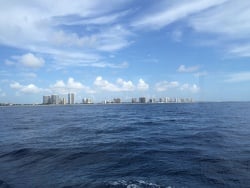 On Wednesday morning July 13th, about a mile and a quarter off of Singer Island Florida, a calm breeze brushed over the crowd gathered to watch the sinking of the Ana Cecelia, a confiscated freight ship once used to smuggle drugs. Filled with plugs, the ship was prepared to leave it’s past behind and become the 151st installment in Palm Beach County’s artificial reef program. 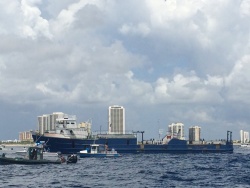 Typically, artificial reefs are built to promote marine life in areas with a featureless bottom. A ships magnitude and divided structure provides an ideal platform to generate marine ecosystems. Strategically placed, the Ana Cecelia is the southernmost freight ship in an underwater fleet. Residing in close proximity to the gulf stream, local officials hope the new flagship will generate the best variety of biodiversity aiding in putting the Palm Beaches on the map as one of the worlds best dive locations.

Over the course of the next few months, Mother Nature will run her course adorning the Ana Cecelia with algae and coral. Divers will flock to the three story high underwater metropolis as she becomes colonized with Hawksbill sea turtles and two hundred to four hundred pound Goliath Grouper. Despite being laid to rest, the Ana Cecelia will flourish 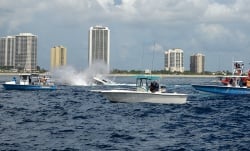 as a sanctuary for Atlantic marine life.

In my twenty minutes of cerebration I mulled over the common theme of South Florida’s tourism woven into nearby conversations. As South Florida natives we understand the vitality of tourism. An understanding so ingrained into the lifestyle of South Floridian’s that it is reflected in popular culture. Floridian’s dependency on tourism is a main theme in Bloodlines, Netflix’s popular drama series. The show focuses on the Rayburn’s, a family rooted in the Keys, who have made their lives in tourism. Throughout the series the shows illustrates how the decline of the Rayburn’s beachfront Inn impacts their overall well being. Although not the primary focus of the show, the discussion of our livelihood’s dependency on a healthy tourism industry is one that all South Floridians need to have. The foundation of South Florida’s economy is based upon thriving tourism, without healthy coastal assets our foundation will crumble. The status of South Florida’s tourism industry is threatened due to the decline in environmental conservation.

Many of the ships’ onlookers, including myself, hope these artificial reefs will help promote eco-tourism. Living in South Florida is a luxury most people are not privileged with and those who are should be indebted to its ecosystems for sustaining a lifestyle people will travel the world for. It is our inherent responsibility to protect our coastal environment, while perpetuating a booming tourism industry. To supplement Loggerhead Marinelife Center’s vision and mission we provide visitors with the opportunity to embark on SWIM eco-tours. In the state of our environment, all tourism should be eco-tourism.

To quote Bloodlines “We’re not bad people, but we did a bad thing” – we ignored the health of our coastal ecosystems for too long and now we are all making a mad dash to preserve, restore, and conserve what’s left. Take a pledge today to support eco-tourist attractions and become involved in Palm Beach County’s artificial reef program.