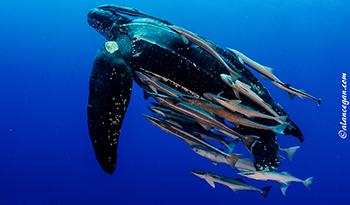 It was a cool night on Juno Beach as the Loggerhead Marinelife Center research team slowly approached Clinton. With monofilament line and rope wrapped around the leatherback’s flipper, the team worked carefully to remove as much line as they could before the nesting mama returned to sea. Weeks later, Clinton’s flipper was healing, and in that moment, all was well in the world.

Between March and June, nighttime surveys are a regular occurrence with research staff, as LMC ramps up the Leatherback Project each year. LMC scientists originally created the project in 2001 after noticing higher than average leatherback numbers on local beaches in the mid 90s. The goal of the project? To study the local population and learn more about the largest sea turtle species – which are tough to study because they’re pelagic (open-ocean) and usually aren’t seen on densely-nested beaches.

In 2001, the team started a mark-recapture project to better understand the population, and have tagged and documented over 500 individual female leatherbacks nesting on Juno Beach since the project’s inception. Mark-recapture programs aim to document as many nesting females as possible in an attempt to better understand previously poorly understood populations  – including how they grow or shrink, move and migrate.

Until the project started, LMC scientists did not realize the importance of the Florida leatherback nesting population.

LMC biologists began tagging nesting females with metal flipper tags and PIT tags – similar to a microchip for a dog or cat. As the program grew through the years, researchers added satellite tags to some turtles to track movements between nesting events, and collected genetic samples to build a stock of the Southwest Atlantic nesting population.

Unlike loggerheads or greens, leatherbacks are capital breeders – which means they don’t eat during nesting season. And even though they constantly haul their huge bodies onto the beach, they don’t replenish their energy with food.

Research Innovations Manager Stephanie Kedzuf was curious about how leatherbacks replenished their energy after nesting. Under the direction of LMC Director of Research and Rehabilitation Dr. Charles Manire, she and the team set out to learn more. They still documented the females the way they had been, looking for healed and new injuries and boat strikes. But this year, they collaborated with North Carolina State’s College of Veterinary Medicine and began to take blood and tear secretion samples in hopes of learning more about leatherbacks’ metabolism and physiology.

“We don’t know a whole lot about metabolomics, but it does provide a better physiological picture of the animal,” says Kedzuf. “We want to know what it’s doing on a health level to the turtles.”

But documenting leatherbacks is no small task. Like all sea turtles, leatherbacks nest at night, which meant the LMC team had to work from 9 p.m. until 5 or 6 a.m.

“It took me about a week to get used to waking up in the middle of the afternoon and working all night,” laughs Kedzuf. “I guess it’s because I’m young and my body got used to it. Plus lots of coffee.”

What keeps Kedzuf going, though, is the chance to witness an ancient practice.

“To watch the mama sea turtles do their thing and to walk back through time with them is awesome,” she says. “It’s also really cool to see the same turtles you’ve seen before return to nest on the same beach year after year. You want to see your hard work get results.”

Kedzuf again mentions Clinton. The turtle had never been tagged before, but as she crawled across the beach, LMC’s team noticed the turtle had fishing line and rope wrapped around her flipper. Though the team removed as much as they could, they couldn’t get it all. Luckily, another research group saw Clinton and removed the rest of the line.

“When we saw her again, she was using the flipper just fine and the swelling was going down,” Kedzuf says. “It just showed that with the right actions, you can make a difference.”

So what does the future look like for the Leatherback Project at LMC? The team will continue to analyze the data that’s been collected over the years, aim for more publishing opportunities and search for new collaborations. Kedzuf says it’s important to study the local population, as it’s more stable than the Pacific Ocean populations.

“Some of the populations were crashing for awhile, but now the numbers are picking back up,” says Kedzuf. “It’s really great to see result from the efforts of scientists 30 years ago. We have to trust that we are also making a difference for the future.”

Posted in News and tagged Loggerhead Marinelife Center, Research, The Leatherback Project
← Conservation – Towards a natural state of harmony.Research Part 1 – It’s in their blood →
Book Now