“Mayor Mort” the sea turtle is eating well and gaining weight. You can adopt Mayor Mort or visit the turtle at LMC.

Mayor Mort Levine was extremely proud of Loggerhead Marinelife Center’s sea turtle hospital and the town’s beautiful beaches that attract sea turtles and tourists from around the world. He admiringly nicknamed his beloved town as “Juno Beach – World Headquarters.”

Now, Loggerhead Marinelife Center is proud to continue Mayor Mort Levine’s legacy with the support of the Town of Juno Beach, Mayor Mort’s family and his friends. Citizens are encouraged to become involved in Mayor Mort the sea turtle’s recovery through a symbolic sea turtle adoption of Mayor Mort or a visit to the center.

“We are extremely grateful for Mayor Mort Levine’s leadership in Juno Beach and for his support of Loggerhead Marinelife Center,” said Jack Lighton, President & CEO. “It is only fitting that we name one of our beloved sea turtle patients in memory of this extraordinary man.” 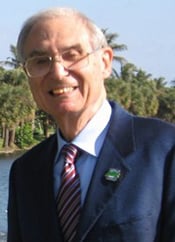 The turtle was found early last month lethargic and underweight. The turtle also had numerous large barnacles on its shell and hundreds of small barnacles and marine leeches on its skin. LMC’s hospital staff and volunteers gave the turtle a freshwater bath, which helped to remove the parasites and leeches.

Though bloodwork showed that the turtle was anemic, hypoglycemic and deficient in many other essential values, hospital staff gave Mayor Mort LMC’s proprietary “TPN” (parenteral nutrition) therapy which was developed in their sea turtle hospital in 2013. This sophisticated therapy provides nutritional support and stimulates the patient’s bone marrow, helping to resolve the anemia. Mayor Mort is now eating well and gaining weight, receiving antibiotics and fluids as prescribed.

Once the sea turtle is medically cleared for release, LMC will celebrate the sea turtle and Mayor Mort Levine’s legacy, and invites the public to join in this future beachside celebration, which will be announced on social media and on www.marinelife.org.