As winter weather blankets the nation, snowbirds flock to South Florida for a tropical escape. The thousands of northern natives who inhabit oceanfront condos are not the only ones who can’t resist our warm waters. Every year over 10,000 blacktip sharks migrate along the coast of South Florida creating a spectacular sight for unsuspecting beach-goers. Although visitors may be caught off guard by the migration, local scholars and researchers have been tracking and observing the migration for several years.

In an ABC News article, Dr. Stephen Kajiura of Florida Atlantic University (FAU) explained that in previous years the blacktip sharks migrated further south, but in recent years the sharks have stayed as far north as the Jupiter Inlet (Borello, 2016). In order to generate a better understanding of this great migration, Dr. Kajiura has been tagging and observing these sharks. Situated south of the Jupiter Inlet and north of Palm Beach, the Juno Beach Pier offers an ideal location for monitoring the migration.

Recently, Loggerhead Marinelife Center, which manages the Juno Beach Pier, teamed up with a group of researchers at FAU to install a shark tracking computer on the pier. As an ocean conservation hub, LMC aims to work with all groups interested in marine and ocean research, including shark research. Shark research is imperative to helping us better understand the health of our oceans; sharks are apex predators and are a critical piece of our ocean ecosystems. Without understanding the marine animals in our oceans, we are unable to understand the health of our ocean in its entirety.  The shark tracking computer will allow the team of FAU researchers to monitor the migration of previously tagged blacktip sharks. 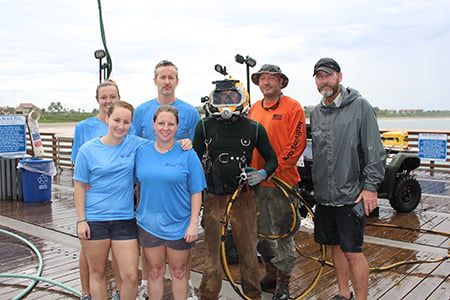 Dr. Kajiura’s research team includes Beth Bowers, a doctoral student studying under Kajiura. Bowers’ doctoral dissertation focuses on defining the current migratory route of the Western Atlantic blacktip sharks, Carcharhinus limbatus. In a brief interview, Bower’s explained the process of tracking and monitoring the sharks, “We longline for them off the coast of Palm Beach in the winter months when they are at the southern end of their migration. We then instrument the ones we have caught with acoustic transmitters.” Acoustic transmitters emit acoustic sounds in a specific pattern that relates to a unique identification code, called a ping, for that particular instrumented shark. The transmitters are programmed to ping out the unique ID code at a regular time interval.
Continuing to expand on the process, Bowers’ said ” The presence of a ping, or shark in our case, is recorded by an acoustic receiver that is stationed underwater, generally affixed to a mooring line and buoy. We are able to detect the movements of these sharks all along the coastline because we cooperate with a netwo 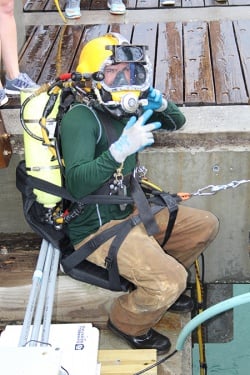 rk of researchers that use the same method. These acoustic receivers sit in the water column and “listen” for pings as animals, instrumented with transmitters, swim by.”
Installing the transmitting device on the Juno Beach Pier has changed the process of recording data for the research team. Before the installation on the pier,the research team had to take a boat to the receiver’s location and scuba dive down to retrieve the receiver. After retrieving the receiver, the research team would download the information on a laptop while still on the boat. Then, the team would dive back down to re-affix the receiver to the mooring line. “We do this [entire process] quarterly and it can be very time consuming” said Bowers. Now, the receiver affixed to the Juno Beach pier enables the researchers to collect data without physical intervention. Bowers and the rest of the FAU research team is now able to extract the information from the receiver through an IP address.
Because of the ideal location of the pier, Loggerhead Marinelife Center and the Juno Beach Pier have been fortunate enough to assist the Florida Atlantic blacktip shark research team in collecting their date in a more time efficient manner. In one simple step, the research team can be “tipped off” when the shark migration begins.
*For more information on the blacktip shark monitoring and tracking research, please contact Dr. Kajiura or Beth Bowers at Florida Atlantic University.
Posted in News and tagged Conservation, Loggerhead Marinelife Center
← Four Ways Sea Turtles Help Keep our Oceans & Beaches HealthyWe’re Baaaack! – Winter Programs at LMC →