An LMC activity reveals the importance of cleaning up microplastics.

Many people are familiar with the Great Pacific Garbage Patch, a large mass of plastics floating in the North Pacific that stretches as wide as the state of Texas. The reason for this accumulation? The North Pacific Gyre, formed by four prevailing ocean currents in the northern Pacific, continuously rotates at a clockwise pattern, keeping the debris in one large mass.

Unfortunately, sea turtles and other marine animals can mistake large pieces of plastic for food. Plastic bags and deflated balloons, when moving with the currents, can look like jellyfish – a common source of food for sea turtles. After consumption, this plastic can get stuck in sea turtles’ digestive systems and keeps the animal from digesting real food properly, thus preventing the animal from eating and getting the nutrients that it needs. This can eventually lead to starvation.

Unlike the large pieces of plastic, much of the debris in the North Atlantic Garbage Patch is composed of microplastics, which are formerly large pieces of plastic that are broken up into tiny pieces, as well as microbeads, small pieces of plastic contained in many everyday items including toothpaste or rinse-off cosmetics. The beads are often the same size and shape as fish eggs, causing some marine animals to mistake them for food. Many of the animals that eat these small bits of plastic are microscopic, like zooplankton. Additionally, the natural chain reaction in the food web means larger organisms in the web will also eventually accumulate the beads in their systems, preventing them from digesting properly or getting the nutrients they need. 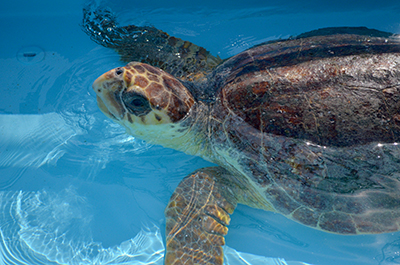 Because plastics never fully decompose, this poses a real problem for the health of our oceans. However, not all hope is lost. Thanks to researchers at the Sea Education Association (SEA), valuable information about the North Atlantic Garbage Patch has been obtained in order to better understand the patch – including the types or debris that compose the patch and how to slow down its growth. Learn more about the research by visiting www.sea.edu/plastics2010.

There is no easy fix for the problem of the North Atlantic Garbage Patch. Plastics will continue to break down into smaller pieces and may be eaten by fish or even smaller organisms. The garbage patch cannot be “cleaned up” alone by scientists or passionate environmentalists. In the end, it is up to everyone to do their part in reducing the size of the North Atlantic Garbage Patch in order to save our oceans and sea turtles.

Here are simple solutions that everyone can take:

For more information on how to reduce, reuse and recycle, visit https://www.epa.gov/recycle.