Balboa, a juvenile green sea turtle, arrived to the center with unintentional boat propeller injuries on its head and carapace.

“Who’s your favorite sea turtle patient?” A small child probed me for an answer while I was taking photos in the outdoor sea turtle hospital. I tried to politely avoid playing favorites, but the young girl rolled her eyes in demand of an answer. In an attempt to reassure me that it’s okay to have a favorite, she blurted out “Squash is my favorite. So, who is yours?” Although, I usually like to tell young impressionable conservationists that it’s impossible for me to select a favorite, I caved revealing that I have a special connection to Balboa.

Balboa, a juvenile green sea turtle, arrived during my second week of working at Loggerhead Marinelife Center (LMC). On the day of the turtle’s arrival Dr. Charlie Manire notified me that we had just received a sea turtle with an unintentional boat strike injury. Before Balboa, I had never witnessed a sea turtle with a recent boat strike injury, nor had I fully envisioned how gruesome one would be in person. Found floating by Peanut Island in Riviera Beach, Balboa arrived to the center with a deep gash that ran across the turtle’s lower back exposing sensitive tissue and a thick scrape across its head. Because of the severity of the turtle’s wounds, Balboa was dry docked on and off for almost two months.

Unfortunately, Balboa is not the first nor last sea turtle patient that will arrive to the hospital with boat strike injuries. Balboa, Fritz, Rudder, and Judy are all current sea turtle patients who have suffered from boat strikes. All of the sea turtles mentioned, expect Fritz, have endured wounds to their carapaces. Unlike the other turtles, Fritz’s carapace was not split open, instead we suspect the turtle developed a “hump” in its carapace from being struck by a boat. These deformities in the carapace, often caused by boat strikes, are usually caused by an injury early in life that affects the proper growth of the carapace. In Fritz’s case, the injury has caused the turtle to develop a chronic buoyancy issue, which affects a turtle’s ability to dive and forage for food. The reason unintentional boat strikes or propeller injures are so detrimental is because “they can cause severe organ damage, loss of extremities, fractures, and paralysis. The spine and lungs are located just under the carapace (top shell) which makes them extremely susceptible to trauma leading to mortality.” explained Hospital Coordinator Nicole Montgomery, CVT. 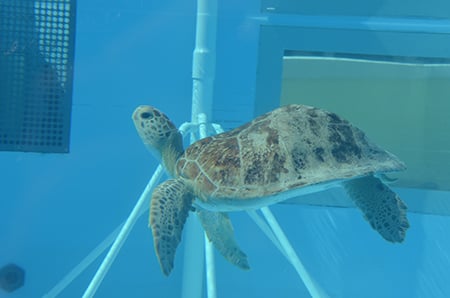 Fritz, a juvenile green sea turtle, that was found with a deformed carapace. Our rehabilitation staff believes the deformity resulted from a boat strike.

Year after year, our hospital treats sea turtles with unintentional boat strike injuries – some more gruesome than others, yet all of them needing care from our hospital staff. After inquiring about Balboa, Director of Research and Rehabilitation Dr. Charlie Manire informed me that “unintentional boat strikes are some of the most gruesome injuries I have seen in sea turtles, are probably the most painful, and have some of the highest mortality rates of anything we see.”

Over time, Balboa’s wounds began to heal and the turtle was returned to the water, but the image of the initial severity of the wounds will never leave me. For decades our center, as well as other conservation organizations, have been spreading messages of sea turtle-safe boating, yet we still receive new patients. After witnessing a sea turtle with a fresh boat strike wound, you began to realize that awareness is not enough. In collaboration with our rehabilitation staff, Chief Conservation Officer Tommy Cutt and Outreach Coordinator Demi Fox determined that LMC needed to take our sea turtle-safe boating message to the next level. “Awareness is the first step in creating a change in behavior, but a societal change does not take full effect until policies or initiatives are implemented.” said Chief Conservation Officer Tommy Cutt.

In an effort to reduce the amount of unintentional boat strike injuries we see at our hospital, this year our conservation team developed a Voluntary Speed Reduction Zone (VSRZ) initiative (under Project SHIELD) to take effect in waterways off the coast of Florida during sea turtle nesting season. On Florida’s East Coast, the area from Tequesta to North Palm Beach is home to some of the most densely utilized sea turtle nesting beaches in the country.  Each year, from March 1 – October 31, tens of thousands of leatherback, loggerhead, and green sea turtles return to their natal beaches to lay their own eggs. Currently, offshore areas near sea turtle nesting beaches are not designated no-wake zones. During nesting season, female sea turtles spend an increased amount of time swimming near the water’s surface making them more susceptible to an interaction with a boat propeller or hull (Houghton et al. 2002). Our team believes “a voluntary speed reduction in this critical area will increase awareness of sea turtle conservation and could potentially lead to a significant decrease in interactions with recreational boats in the state,” said Chief Conservation Officer Tommy Cutt. 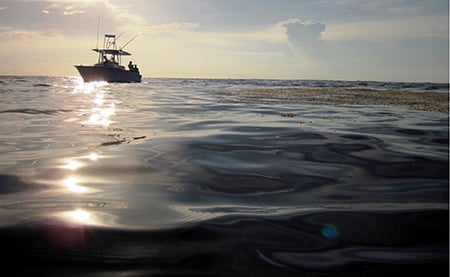 Under Project SHIELD, the Voluntary Speed Reduction Zone (VSRZ) project will take effect in waterways off the coast of Florida during sea turtle nesting season.

With the support of Archie Carr Center for Sea Turtle Research at the University of Florida and Florida Fish and Wildlife Services, the VSRZ will be executed in three phases over the course of the next few years. In 2017, the VSRZ will focus on data collection to determine an appropriate voluntary speed. The speed restriction will be set as a safe speed for sea turtles while not significantly impacting the business of tour operators in areas critical to sea turtle nesting success. Outreach Coordinator Demi Fox informed us that LMC staff and Conservation interns “will use a long-range laser speed detection system and binoculars to record data from three pre-determined collection points on a daily basis at three different time blocks.” Since the voluntary speed will be set based on data collection, the project will critically depend on the assistance of volunteers, interns, and staff.

Our rehabilitation and conservation staff firmly believe that the VSRZ will significantly decrease the number of unintentional boat strike cases, like Balboa. However, this initiative cannot take full effect without your help. We need dedicated Conservation interns and volunteers who are willing to be more than sea turtle advocates. We need passionate conservationists looking for an active way to make a difference. We need you!

If you are an individual compelled to be on the front-line of change, please apply now to be a Conservation intern.