On my first day of work at LMC, our President & CEO Jack Lighton stood in our sea turtle hospital holding a tupperware labeled “hatchlings,” which held nine small jars containing the stomach contents of deceased hatchlings, and began to get teary eyed. A silence of understanding filled the conversation before he continued “It’s no longer a question of ‘if a sea turtle has ingested marine pollution,” it’s now a question of ‘how much the turtle has ingested.” 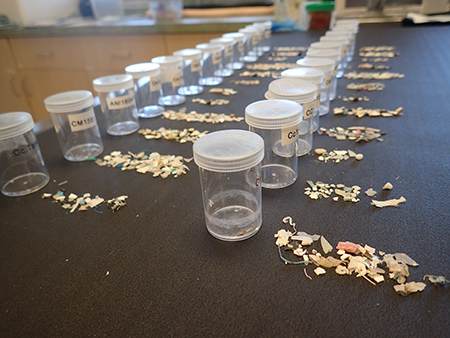 Fast forward to eight months later, that sentence has never left me. A flood of emotions overcomes you when you are standing in the hospital as the rehab staff conducts routine treatments on the sea turtle patients, but an even more indescribable experience comes next. A wall of jars containing marine pollution previously ingested by past patients lines the wall to the right of the hospital operation suite. Standing in the hospital with Jack was the first time I had been exposed to the wall of marine pollution. It’s startling to gaze upon the wall looking at jars reading “Xander,” “hatchlings,” “Laddie,” “Rainman,” and “Stuart” all containing a handful of marine pollution.

Unfortunately, the rate of marine pollution entering our oceans is rapidly increasing, which means it poses a greater threat to all human and marine life. One hundred percent of all wash-back hatchlings that arrive to our hospital have ingested marine pollution and several of our juvenile and adult sea turtle patients have become sick or injured because of marine pollution. Year after year, marine pollution is a never ending story on our campus.

Throughout LMC’s history, we have taken conservation efforts to attempt to reduce the amount of marine pollution in our oceans, but in recent years we have ramped up our efforts through Project SHIELD. Our multi-faceted conservation program provides conservation and pollution solutions to fishing piers, recreational boaters, beach-side hotels, snorkel and SCUBA operator, fishing charter operators and beach access points. Under Project SHIELD, our conservation team has developed the Responsible Pier Initiative (RPI), Balloon Ban, and Ocean Friendly Restaurants to reduce the amount of pollution in our oceans and ultimately sea turtle patients. Consistently, our hospital staff receives sick or injured sea turtle patients that have encountered discarded line or plastic pollution. Through Project SHIELD our Center directly addresses both discarded line and plastic pollution by providing solutions for recycling fishing line and plastic.

Several of our current sea turtle patients have become sick or injured because of plastic pollution, including our hatchling sea turtle patients and Rudder. It’s estimated that one third of plastic packaging ends up in our oceans and by 2025, there’s expected to be one pound of plastic in the ocean for every three pounds of fish. Each year, more than eight million tons of plastic ends up in our rivers, streams and oceans. Our Center actively sees the effects of marine pollution on our marine life. Marine pollution is outpacing our ability to adequately manage it, according to NOAA’s research, it’s estimated that 14 billion pounds of marine pollution enter our rivers, streams and oceans each year.

As you read the stories of a select few of our patients, please remember to be an ocean and sea turtle advocate in your daily life by striving to improve the health of our oceans. Together we can be the ocean heroes our planet deserves.

Burt Reynolds. Burt Reynolds, the turtle is only the 5th stranded olive ridley to ever be documented in Florida. Although a rare case, this turtle is not the first olive ridley LMC has treated. In the winter of 2014 LMC released Meghan, who was the first olive ridley to be successfully rehabilitated in Florida. Burt Reynolds (the turtle) was discovered entangled in 75 pounds of net (pictured below) in the surf on Hobe Sound Beach. According to NOAA’s research, one of the most notable types of impacts from marine debris is wildlife entanglement, which can lead to injury, illness, suffocation, and starvation. In an effort to increase awareness of the impacts of marine debris, the net Burt Reynolds was found in is displayed next to the turtle’s tank.

Hatchlings. At the end of sea turtle hatching season, our hospital staff called us in to look at the amount of plastic found in a post hatchling during a necropsy. Unlike larger sea turtles, hatchlings are not able to pass marine debris as easily. While Samantha Clark, CVT informed us that the stomach of the post hatchling was almost entirely full of plastic, our hearts sank into our stomachs. As-thought-silencing as it is to witness this in person, it’s motivating to make continuing strides for a healthier ocean. 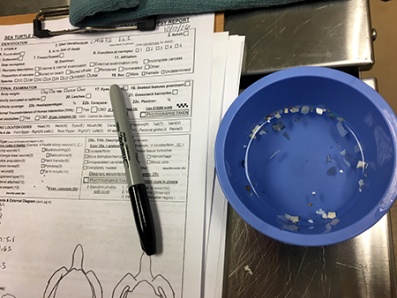 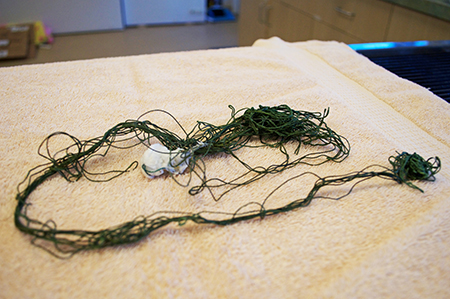 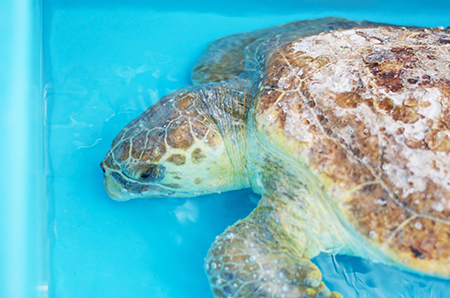 Rudder. A few months ago, our rehabilitation staff discovered a piece of plastic in Rudder’s, a juvenile sea turtle, excrement. Each week, Betsy, a LMC volunteer, collects and tallies the human-associated garbage that washes ashore on the north end of Coral Cove Park on Jupiter Island, about a third to half-mile stretch. She constantly fills bags with pieces of plastic that she discovers during her morning walks. The pieces of plastic, typically sized two centimeters or less, resemble the pieces of plastic our sea turtle patients pass. 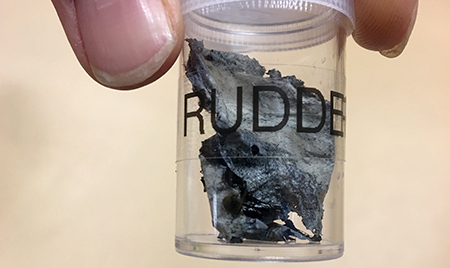 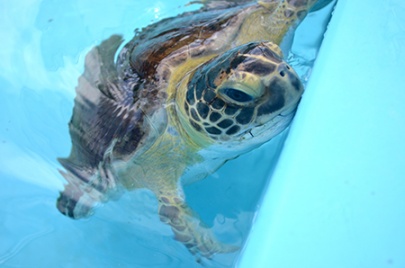