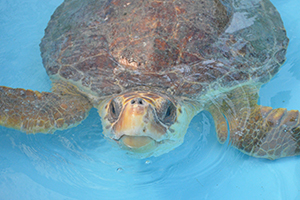 WHAT:  This Wednesday, April 5, Loggerhead Marinelife Center will release Squash, a sub-adult loggerhead sea turtle, from its facility off Juno Beach.

Squash was found last November floating and unable to dive in the Intracoastal Waterway near Jensen Beach. Florida Fish and Wildlife officers brought the turtle to LMC’s hospital staff late in the evening; upon arrival the turtle was active but covered with various epibiota. Bloodwork and radiographs helped hospital staff determine free air in the coelom as the cause for the buoyancy. As such, two different coelomic taps were conducted, removing over five liters of air to resolve the buoyancy issue. After several months of rehabilitation, the sea turtle is now healthy and ready for release.

Squash will be prepared for release from LMC starting at 10:30 a.m. A history of the turtle’s journey and final preparations will be conveyed to visitors by one of LMC’s education docents, followed by a procession to the beach for the release. Guests are encouraged to arrive early for the best viewing.

*Weather may impact the scheduling of this release. Please check www.marinelife.org and LMC’s social media channels for updates of the release date.