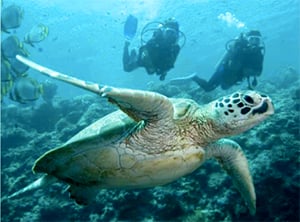 Last week, I made the short trip south to Key Largo, where our partners at Coral Restoration Foundation were hosting their first annual Ocean Conservation Seminars.  It was an inspiring day of learning and meeting new colleagues from Coral Morphologic, NOAA-NMFS’s Southeast Fisheries Science Center, Debris Free Oceans, and the Florida Aquarium.

I spoke about LMC’s Project SHIELD and a few of the initiatives we are currently working on.  Following my talk, I was taking questions from the audience when a gentleman raised his hand.  To my surprise, he didn’t have a question at all but instead graciously thanked me and the team at LMC for doing the work we are doing.  “It’s very important,” he said.

I would soon learn that this man was Martin Moe, a well-known and respected pioneer in marine aquaculture and habitat restoration. Mr. Moe has had an impressive decades-long career including researching red grouper with the Florida Marine Research Laboratory, designing protocols for culturing pompano and tropical fish, and, alongside his wife, Barbara, founding Aqualife Research Corporation in 1973 and Green Turtle Publications in 1982.  Although he is technically retired, Martin is currently working as an adjunct scientist at Mote Marine Laboratory and a member of the Florida Keys National Marine Sanctuary Advisory Council. Today, his research is focused on developing techniques for culturing long-spined sea urchins (Diadema antillarum), a species crucial for the restoration and survival of Atlantic coral reefs.

Following the seminars, I briefly spoke with Mr. Moe to introduce myself and try my best to absorb any knowledge he could impart on me. He recently sent me one of his writings and was kind enough to give me permission to share it here.  In times when the future of our ocean and marine protected areas is uncertain, we can turn to leaders like Martin, who will continue to inspire and lead by example for as long as they are able. I hope you’ll enjoy his words as much as I do.

It was the year 1511. The old Calusa Indian sat on the white sand beach of Lower Matecumbe Key, watched his grandchildren play in the clear sparkling waters at the edge of the island and, knowing that his remaining years were not many, contemplated his world, the Florida Keys. His life had been one with the tropical sea and the subtle seasons of these islands; he had never wanted for sustenance or beauty. As the world had been for his ancestors, it was for him, and for those who would follow him. He knew that the spirits of the earth and sea would always provide for the needs of his people.

He thought of what he knew about his world.

The innumerable queen conch of the nearby grass beds, they were Forever.

The huge turtles that crawled on the beaches and lay their eggs, Forever would they do so.

The giant groupers hiding in the rocks and reefs, Forever.

The spiny lobsters found everywhere from bay to reef, Forever.

The sea urchins that lived in the rocks and reefs and buried themselves in the grass beds, Forever.

The Caribbean monk seal, found on sandy beaches and rocky shores, they ranged to every corner of his world, Forever.

The great living rocks, the foundation of his world, the corals that protected the islands during storms and made homes for fish and other creatures of amazing form and color, they were Forever.

Five hundred years later I sit where perhaps he sat so long ago. My grandchildren play in the waters that sparkle just as brightly, but are filled with the effluent of a civilization unimaginable not so very long ago. My thoughts also wander as my days wind down, as did his. I also love these islands, but I am not content. I know that Forever, is not forever.