The beaches have been quite busy this week!  Our team has been busy as well, with three more leatherback encounters.  We welcomed back a very healthy looking Mrs. Waverly, who only measured 147 cm long.  She first nested on Juno Beach in 2009, and has been encountered while nesting in four subsequent years.  We had a turtle two-fer on Tuesday, with Iris and Dulce nesting both nesting in a two-hour period.  Dulce was 150 cm long, or just under five feet.  This sweet girl has quite the healthy fat layer.  She was first tagged in 2013, and has nested on a two-year interval in 2015 and 2017.  The other leatherback of the night was with Iris.  She was slightly bigger, with her carapace measuring 156.5 cm long.  Iris was originally tagged in 2007, and hadn’t been encountered by LMC staff again until this year.  She had been tagged recently, so it is likely she has been nesting on a beach patrolled by another project.  We are excited to see this old girl’s return to Juno Beach! 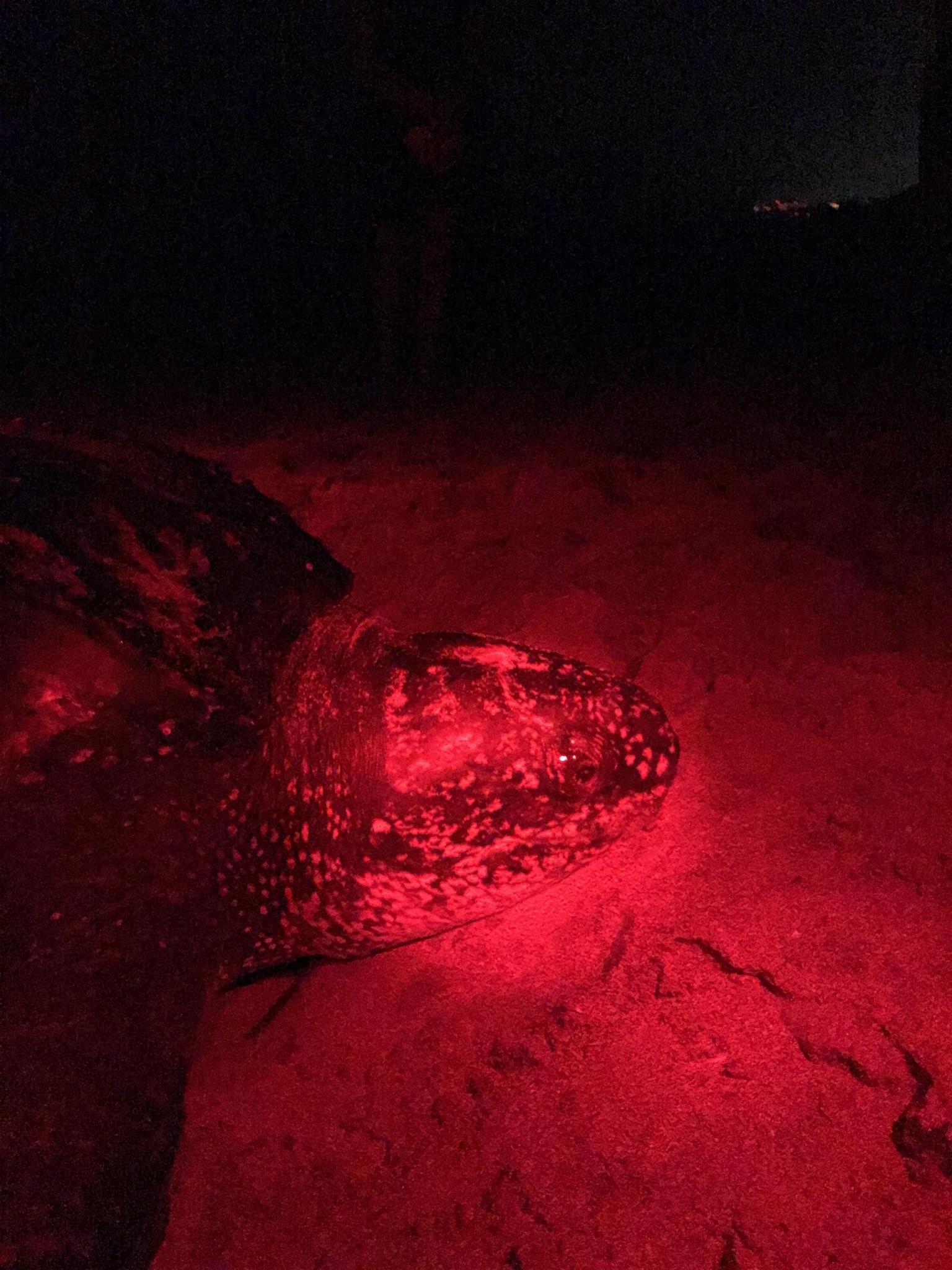 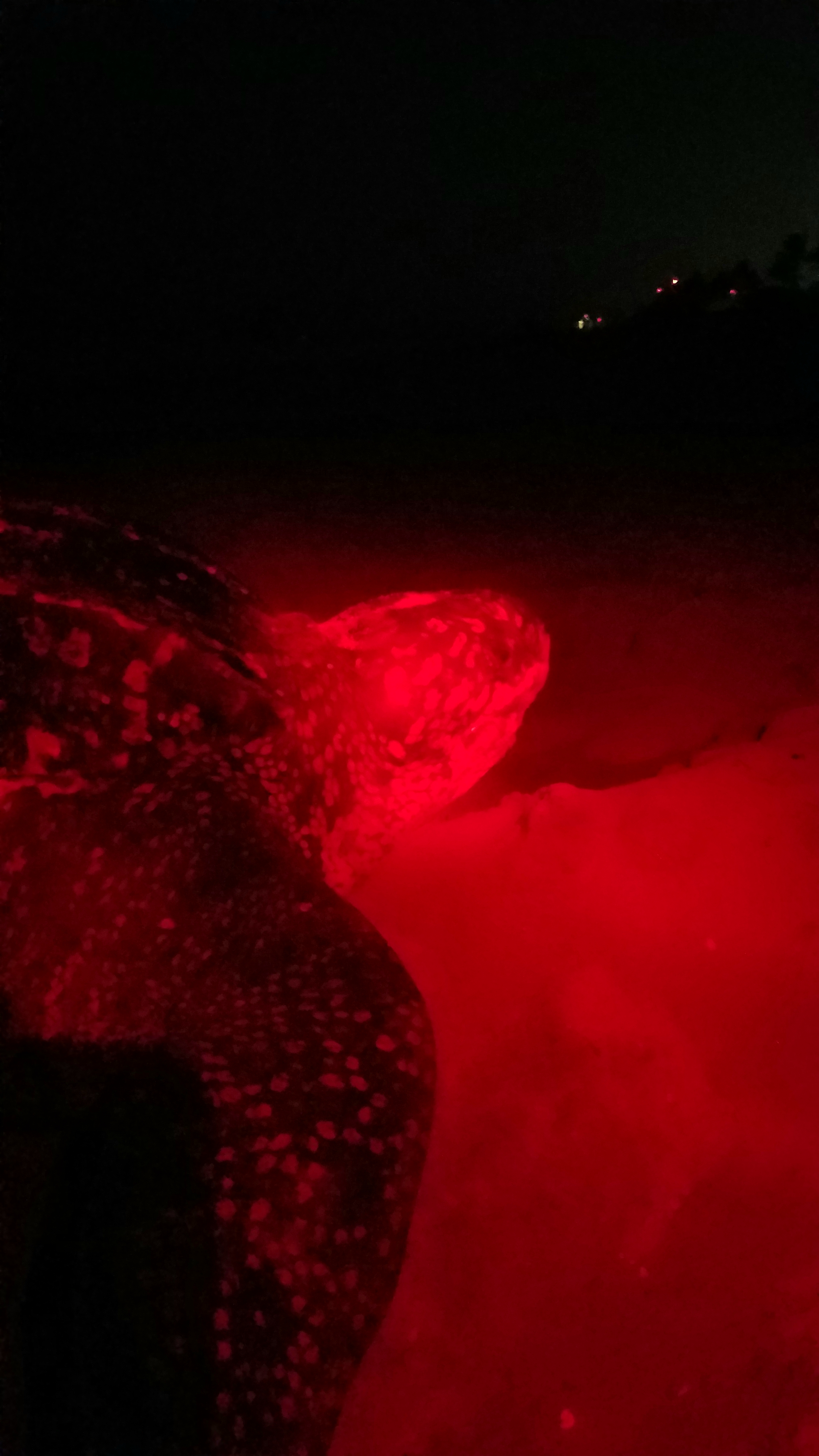 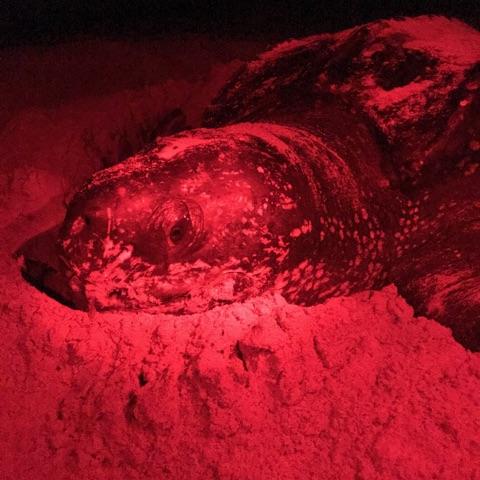 Iris nested near a beach access with bright white parking lot lights nearby.  This will be a problem for her hatchlings when they emerge.  While on land, sea turtles orient away from dark silhouettes and towards the brightest horizon (which is usually the light of the moon reflecting off the ocean) to navigate their way back to the sea.  When artificial white light is introduced near nesting beaches sea turtles can become confused, or disoriented, and struggle to find their way back to the ocean.  Disoriented hatchlings become easy prey for many species.  If they escape predation, disoriented hatchlings can become entrapped in man-made obstacles.  Hatchlings will quickly reach the point of exhaustion, as they expend much more energy than usual frantically trying to get off the beach.  LMC staff will work to get sea turtle safe lighting installed before Iris’ nest hatches in June.  Artificial white light pollution is a problem that has significant impact on sea turtle conservation, with a solution as simple as changing a light bulb.

Iris nesting.  Note the bright white lights behind her.

Disclaimer: All marine turtle images taken in Florida were obtained with the approval of the U.S. Fish & Wildlife Service (USFWS) and the Florida Fish & Wildlife Conservation Commission (FWC) under conditions not harmful to this or other turtles. Images were acquired while conducting authorized research activities pursuant to FWC MTP-17-211.