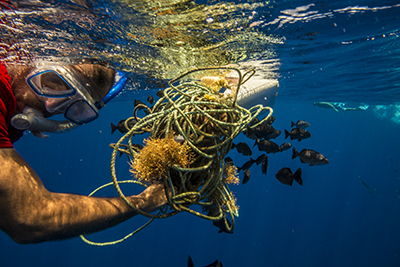 Loggerhead Marinelife Center will host a free public screening of The Smog of the Sea, a documentary from filmmaker Ian Cheney and original score by Jack Johnson, on Friday, Oct. 6 at 7 p.m. The 30-minute film chronicles a research expedition through the Sargasso Sea and the global issue of plastic marine pollution.

Prior to the screening, LMC will hold a beach clean-up from 5:30-6:30 p.m. on Juno Beach. Light bites will also be offered before the screening.

The Smog of the Sea chronicles a one-week journey through the remote waters of the Sargasso Sea. Marine scientist Marcus Eriksen invited onboard an unusual crew to help him study the sea: renowned surfers Keith and Dan Malloy, musician Jack Johnson, spearfisher woman Kimi Werner and bodysurfer Mark Cunningham become citizen scientists on a mission to assess the fate of plastics in the world’s oceans.

After years of hearing about the famous “garbage patches” in ocean gyres, the crew is stunned to learn that the patches are a myth: the waters stretching to the horizon are clear blue, with no islands of trash in sight. But as the crew sieves the water and sorts through their haul, a more disturbing reality sets in: a fog of microplastics permeates the world’s oceans, trillions of nearly invisible plastic shards making their way up the marine food chain. You can clean up a garbage patch, but how do you stop a fog?

Using nostalgic super-8 footage, sparkling underwater cinematography, an original score by Jack Johnson and shipmate Simon Beins and live action footage of the crew’s research, The Smog of the Sea provides a new perspective on the once pristine oceans, and makes an artful call to action for rethinking the scourge of the sea — single-use plastic. Directed by Peabody Award-winning and Emmy-nominated filmmaker Ian Cheney (King Corn, The City Dark, The Search for General Tso).

“As someone who loves and lives in the ocean, I couldn’t be more excited to have participated in 5 Gyres’ SEA Change Expedition,” Jack Johnson said. “I look forward to raising awareness of the importance of reducing our dependency on single-use plastics.”

Singer-songwriter, surfer and longtime ocean lover Jack Johnson has been affecting ocean health worldwide by supporting plastic-free initiatives through his social action network All At Once and his Johnson Ohana Foundation.

The three-leg expedition marked 5 Gyres’ 16th expedition, having sailed around the world once already to document the global impact of plastic marine pollution. In December 2014, 5 Gyres published the first global estimate on plastic pollution, finding 270,000 metric tons from 5.25 trillion particles of plastic.

“What we know now is that plastic in the ocean quickly shreds into microplastics and joins the SMOG of plastic polluting our oceans,” said Dr. Marcus Eriksen, 5 Gyres co-founder and director of research. “This new research revelation is driving solution inland, to the top of the watershed where the problem starts. But we need to return to sea, to educate crews, understand more and monitor our successes on land.”

Jack Johnson:
Jack Johnson grew up surfing and playing guitar in Hawaii.  Since 2001, he has released 6 studio albums and 2 live albums that have sold over 25 million copies worldwide. His Brushfire Records label and touring crew have been leaders in the greening of the music industry and his All At Once social action network connects fans with local non-profits at each tour stop. Jack, with his wife Kim, founded the Kokua Hawaii Foundation to support environmental education in Hawaii’s schools and communities, as well as the Johnson Ohana Foundation to support environmental, art and music education worldwide. Johnson’s album, tour profits, and personal philanthropic activities have resulted in over $30 million donated to charity since 2001. Visit JackJohnsonMusic.com to learn more.

All At Once:
In 2008, Jack Johnson and crew launched All At Once, a social action network and global community based on the belief that an individual action, multiplied by millions, creates global change. All At Once provides information, tools, and motivation to empower individuals to become active in their local and world community. Through direct support and a matching donation initiative, All At Once has helped raise over $3.7 million for over 400 non-profits worldwide to date, and has been promoted to a collective online community of over 6 million people. Visit www.AllAtOnce.org to learn more.

The 5 Gyres Institute:
The 5 Gyres Institute is a nonprofit organization dedicated to engaging people in design and policy solutions to end the global health threat of plastic pollution. Utilizing research-based scientific findings, 5 Gyres engages corporate partners, policymakers and the general public to reduce plastic pollution by improving product design and recovery systems and by highlighting individual responsibility for plastic waste. To learn more about 5 Gyres or to support their work on plastic pollution, visit www.5gyres.org.