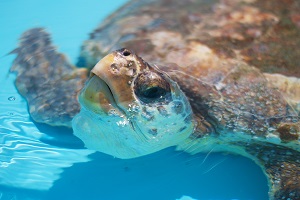 What: LMC will release sea turtles Brother Kenny and Brieanna from its facility off Juno Beach.

Brother Kenny and Brieanna are both sub-adult loggerheads that were found near Hutchinson Island in August. Initial blood-work showed anemia and overall poor health due to starvation. Hospital staff administered fluids, antibiotics and iron to both turtles, and they were placed in temporary freshwater tanks to remove barnacles and leeches that covered their bodies. Brieanna’s radiographs showed intestines full of what appeared to be crab shells, so medications and fluids enabled the crab parts to be passed.

After several months of rehabilitation, both turtles are now healthy and ready for release.

Brother Kenny and Brieanna will be prepared for release from LMC starting at 10:30 a.m. A history of the turtle’s journey and final preparations will be conveyed to visitors by one of LMC’s education docents, with a procession to the beach for the release to follow.

Loggerhead Marinelife Center is a non-profit sea turtle hospital that promotes conservation of ocean ecosystems with a focus on threatened and endangered sea turtles. The Center features an on-site campus hospital, research laboratory, educational exhibits and aquariums, and also operates the Juno Beach Pier, a pier that hosts world-class fishing and sightseeing. Situated on one of the world’s most important sea turtle nesting beaches, Loggerhead Marinelife Center is open daily and hosts over 300,000 guests free-of-charge each year. For more information, visit www.marinelife.org or call (561) 627-8280.