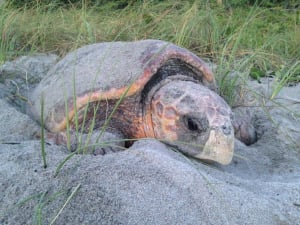 This is the first time these blood values have been documented in wild juvenile loggerheads, particularly in western Atlantic coastal waters.

“Because of this research, we now know the baseline levels at which healthy loggerhead sea turtles should be,” stated Perrault. “This information helps the Sea Turtle Hospital at Loggerhead Marinelife Center – and other rehabilitation facilities – compare their sick patients’ blood levels to that of healthy ones in the ocean. It can even help scientists learn about the animals’ behaviors and food sources.”

The other study was published a few weeks ago in Marine Biology. Though brief, the study examines loggerheads’ foraging behaviors during nesting season – a time when nesting turtles eat very little so they can strategically space out foraging areas and breeding grounds.

Through this data, Dr. Perrault says, scientists can better understand what these sea turtles are doing. In essence, they can peek into the turtles’ lives and their behavior – without expensive monitoring techniques.

If you are a media member interested in arranging an interview with Dr. Perrault with regard to either of these studies, email Hannah Deadman at hdeadman@marinelife.org.