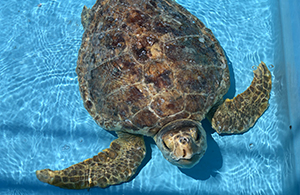 Seabastian, a juvenile loggerhead,
received a blood transfusion on April 19.

Anemia occurs from a lack of adequate red blood cells, which deliver oxygen around the body. Blood transfusions provide oxygen-carrying capacity for the turtle until its bone marrow can make new red blood cells.

According to Dr. Charles Manire, LMC’s director of research and rehabilitation, blood transfusions are administered only when a patient’s anemia is so extreme, he doesn’t think the turtle can survive long enough for its own bone marrow to function. That was the case with Seabastian, so LMC’s hospital staff had to work quickly.

“We knew when Seabastian came in with only two percent of blood cells that the turtle would benefit from a blood transfusion,” said Dr. Manire. “It wasn’t until a few days later when Guy Harvey the turtle had a routine blood test that we were aware it was healthy enough to donate blood. As soon as we were aware of that, we immediately decided to perform the transfusion.” 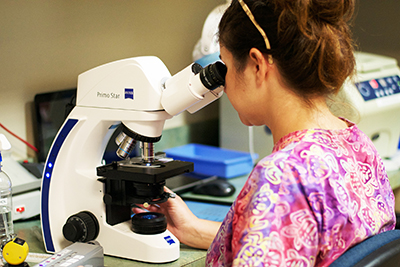 “Prior to using parenteral nutrition to treat chronic debilitated turtles, we did blood transfusions more often. With parenteral nutrition, we can successfully treat chronic debilitated turtles that have a blood cell percentage as low as three percent, without a transfusion,” said Dr. Manire. “In Seabastian’s case, the turtle’s percentage was two percent, so it had about 1/15th the normal amount of red blood cells. The blood actually was so thin, it looked like cherry Kool-Aid.”

Before LMC administered parenteral nutrition – a form of intravenous feeding that has significantly reduced patient mortality – it was rare to save turtles with extremely low red blood cell percentages like Seabastian’s, even with a blood transfusion. Now, with both parenteral nutrition and blood transfusion, the hospital can save more sea turtles that otherwise would not have survived.

When selecting a blood donor, LMC’s hospital staff must identify a turtle of the same species as the recipient, with the highest percentage of red blood cells possible. This can be tricky – because LMC is a sea turtle hospital, no patient is completely healthy. Still, Guy Harvey was LMC’s healthiest loggerhead patient, with the highest red blood cell percentage and no evidence of infectious disease.

After the donation, Seabastian’s red blood cell percentage rose to six percent. According to Dr. Manire, this should keep the turtle alive long enough for it to produce its own red blood cells. 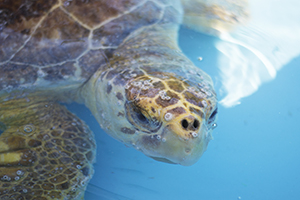 Sea turtle blood has not been studied to the extent that human and domestic animal blood has, so it is unknown what blood types they might have. Currently, the staff uses a procedure called cross-matching to test the compatibility of the donor’s blood with the recipient’s. Seabastian’s and Guy Harvey’s bloods cross-matched perfectly, so the staff didn’t anticipate or encounter any incompatibility problems.

“We’re working with researchers at the University of California at Davis and the University of Florida to answer some of these basic questions about blood types and the best anti-coagulants to use for blood transfusions,” said Dr. Manire.

Guy Harvey is named in honor of scientist and ocean conservationist Dr. Guy Harvey, a great friend and supporter of Loggerhead Marinelife Center.