A fictitious narrative as told by LMC intern, Mikayla Brody 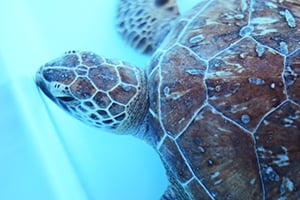 It was a dark and blustery night on the shores of Walton Rocks Beach. The waves of the ocean were frantically colliding with one another as the glow of the moon ricocheted off of their crescendos. The winds howled through the palms and the sea grass, carrying the sharp scent of salt and strife.

Out of all of this chaotic agitation emerged a young Finnigan. A juvenile green sea turtle who was simply seeking serenity and a nice algae dinner found himself at the mercy of a South Florida storm. He was alive but deeply entangled in fishing line, preventing him to swim freely and cutting into his neck and front flippers! Despite this encumberment, Finnigan managed to drag himself up to shore and find a momentary respite from the tumultuous ocean.

Not much later, the sun began to rise up out of the ocean, replacing the cold moonlight with golden warmth. And oh! what arose at the same time? People — humans who saw Finnigan and his shackled situation and sought to help! They called the most trusted sea turtle hospital in all of the land- the Loggerhead Marinelife Center- who they knew would surely untether their trapped turtle.

When LMC heard the turtle’s fate, they immediately gassed up their noble turtle ambulance chariot and headed straight for the beach. Prancing through the sand and down to the water’s edge, the EMTTs (Emergency Medical Turtle Technicians) cradled Finnigan and shepherded him all the way back to their safehouse.

The EMTTs got to work right away. They began by treating all of the cuts and wounds from the fishing line and within just four weeks, his wounds were improving! To make sure Finnigan was as healthy as can be, they also monitored his white cell count through treatment with an antibiotic elixir.

While all of this medicine and science nursed Finnigan’s body back to health, his spirit was nourished back to health by the community that supported him! Throngs of children and families came by each day to say hi and bestow their smiles and positivity upon him.

And he was so grateful! He thought- oh! these humans, how kind and lovely they have been to me! What compassion they have shown me! But even though Finnigan loved his new home at LMC, he knew he was ready to return to his true home at sea. He finally felt healthy enough and properly renewed to combat the snarling ocean and the challenges that lie below. He craved to again experience its gracious fluidity and boundless horizons. And the staff, too, knew the time had come.

So on the 20th of June in the 2,018th year, beloved Finnigan was ceremoniously escorted down to the shores where he first layed that fateful night- much healthier and much more prepared. The staff said their farewells and Finnigan bobbed his head in appreciation. An unspoken bond. The EMTT carried him out into the blue and let him go. And he was free — free to roam and explore and soak up the beauty of the ocean that he could now be fully a part of. No strings attached!