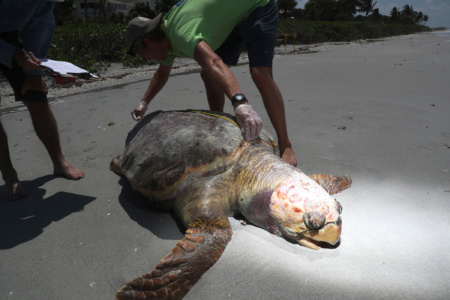 A large number of sea turtles are washing up on Sanibel and Captiva beaches. The suspected cause is red tide poisoning. (Photo: Andrew West/The News-Press)

Over the past week, our team at Loggerhead Marinelife Center has been contacted about the alarming headlines of sick and/or deceased sea turtles washing ashore in Florida. These reports are staggering, yet accurate, and this looks to be associated with one of the largest red tide events in the last decade.

An increase in strandings and mortality in Florida’s sea turtle population is occurring across Florida’s Southwest Gulf Coast and appears to be stemming from a large harmful algal bloom spanning over 80 miles offshore across four counties (Sarasota, Charlotte, Lee, and Collier). The current bloom, known as red tide, is caused by a marine algal species known as Karenia brevis that turns the water a reddish brown color and releases potent biotoxins known as brevetoxins. The algae are usually present in low concentrations, but in particular conditions, they may multiply rapidly and produce enough toxins that can result in massive fish kills, large numbers of marine turtle and marine mammal mortalities, shellfish contamination, and respiratory effects in humans.

Marine animals become exposed to brevetoxins from algal blooms in several different ways. The most common route of exposure is through ingestion of contaminated food. As such, it will work its way up the food chain (known as bioaccumulation), impacting larger animals along the way. There is also exposure to toxins in the water, but this route of exposure is thought to be far less important than ingestion. Finally, when K. brevis cells (the algal species responsible for red tide) burst, the toxins are released and can be aerosolized (i.e., transformed into particles small enough to be carried by air) by wave action and released into the air, in which case the toxins can be inhaled into the body of air-breathing creatures, like sea turtles, birds, marine mammals, and humans.

Once in the body, brevetoxins act as neurotoxins, affecting the central nervous system, causing the animals to lose control of muscle coordination: this can impact basic functions such as swimming and breathing. Additional effects observed include alterations in overall health and immune function and transfer of these toxins to offspring. Death in sea turtles exposed to red tide toxins is often from drowning. If the sea turtles are found prior to drowning, they can often be saved.

Of great concern with the current red tide bloom is its untimely occurrence during the peak months of sea turtle nesting season. Mortality of large numbers of adult sea turtles that are close to shore in these months has a much larger impact on the sea turtle population. This could lead to the direct and immediate reduction in population for these threatened and endangered species with future generations potentially lost.

Loggerhead Marinelife Center is overseeing a research project with several of the sea turtle rehabilitation facilities in SW Florida to determine the effectiveness of a relatively new compound recently being used in humans to counter the effects of various toxins. The compound looks promising to counter the effect the brevetoxins have on turtles affected by red tide. Preliminary testing in conjunction with Florida Atlantic University has shown this new “detox” to be effective in fresh water turtles. In partnership with our collaborators, blood samples are now being collected from the sea turtles stranding alive during this most recent red tide event here in Florida to confirm the treatment’s effectiveness in sea turtles. We believe this new detox treatment will reduce the mortality in affected turtles and provide a viable solution to rehabilitation facilities around the world that are combating the effects of natural red tide cycles.

Natural event
It is important to note that red tide blooms are natural events that usually originate in the open ocean and then spread with winds and currents into the coastal environment. Red tides are global natural cycles and effective ways to mitigate these blooms have not yet been developed. Red tide blooms do appear to be increasing in their frequency and range, however we do not know if this has to do with increased ocean temperatures, fertilizer runoff or other potential factors.

Natural vs. man-made
Here in Florida we are seeing other harmful algal blooms that originate in inland rivers, lakes and waterways that spill into the coastal ocean. These inland algal blooms are far less “natural” and are often greatly exacerbated by water runoff and insufficient water infrastructure. While red tides are more natural events, it is possible that they are exacerbated by the same pollutants entering the watersheds on both coasts of the state. More research needs to be done to understand this link, but we encourage everyone to get involved in this conversation, speak to your elected officials and support your local research organizations.

While we cannot necessarily control red tide, humans can likely take action to reduce the inland freshwater algal blooms, which are happening more commonly here in Florida. Efforts must be made to reduce the amount of fertilizers and septic discharges into the inland water systems that flow into the ocean. In addition to improving overall water quality, we must continue educating communities and corporations to help reduce our consumption of materials, in particular single use plastics, which will help us keep marine debris out of the oceans and off our coastlines. These steps will improve the habitat in which the sea turtles and other marine creatures live. By improving the sea turtle’s environment, we will better protect ourselves as clean air and clean water are paramount to a healthy life for all.

If you spot a sick or injured sea turtle within the state of Florida, you should contact the Florida Fish and Wildlife Hotline at 888-404-3922.