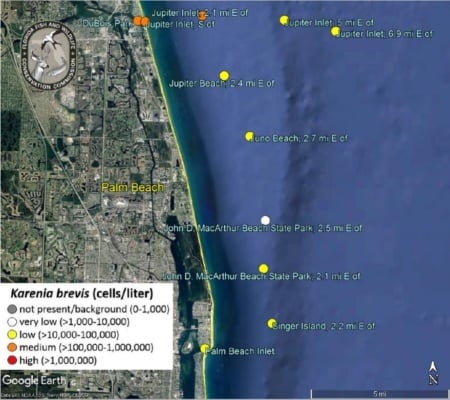 As of Monday, October 1, we now know there are very low to medium concentrations of red tide reported in the Atlantic off of Palm Beach County (see FWC graphic).

Since it is such a rare event on this coast, we would like to share some basic information about red tide and answer some of the most frequently asked questions we have received in the past 24 hours.

Red tide toxins (or brevetoxins) can have several effects. First, when inhaled, they act mostly as just irritants, causing coughing, burning eyes, sneezing, etc. In that case, it is only a real issue for individuals with lung problems, especially emphysema and asthma. Individuals with lung conditions should stay away from the coastline in affected areas as much as possible. Intoxication with brevetoxins in humans is known as paralytic shellfish poisoning or neurotoxic shellfish poisoning and comes from eating shellfish from areas with red tide blooms.

Sea turtles become intoxicated by red tide primarily from eating food that is contaminated with brevetoxins. They likely do not absorb the toxins through their skin from the water or through their lungs from breathing the toxins. 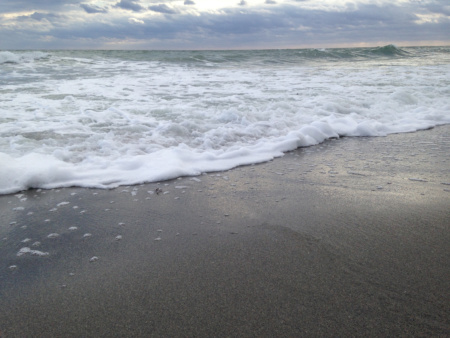 Since brevetoxins are neurotoxins, they primarily affect the brain and central nervous system. Sea turtles affected by them have neurological symptoms such as head bobbing and muscle twitching in milder cases, and can become comatose in more severe cases. We have been working with scientists from Florida Atlantic University and other rehab facilities on the west coast of Florida testing a new antitoxin that is showing great promise in rapidly ‘detoxing’ sea turtles affected by brevetoxins from red tide. In our hospital, we keep this medication on hand in our pharmacy so that affected sea turtles can be treated immediately.

Because the primary route of exposure for sea turtles is through their diet, we will not be feeding any local seafood to our patients. We receive our food supply from international sources, well outside the red tide area.

Loggerhead Marinelife Center, which operates out of Loggerhead Park, is open and not impacted by the beach closures. For updates, continue to check our blog and social media channels.

In an effort to better respond to this and future red tide occurrences, LMC would like to launch our red tide rapid response blood research and detoxification lab. Our Research Laboratory has applied to multiple state and local organizations in an effort to request emergency funding for the equipment, medications and supplies required to monitor brevetoxin levels in sea turtles in a real-time, clinically significant manner. This lab equipment and medication will allow our scientists and medical staff to provide rapid testing to identify the presence of the red tide toxins to multiple local rehabilitation facilities, so they can develop the most effective treatment plans for affected sea turtles.

Loggerhead Marinelife Center’s Go Fund Me Page can be found at: www.gofundme.com/lmc-red-tide-emergency-fund