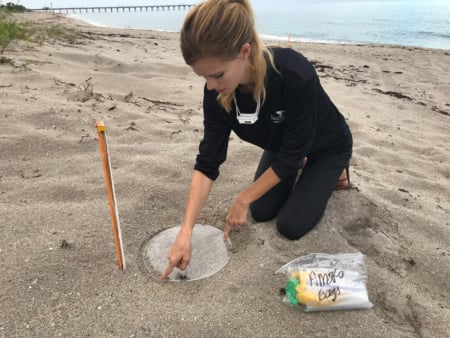 AMDRO pesticide study being conducted. All marine turtle images taken in Florida were obtained with the approval of the U.S. Fish & Wildlife Service (USFWS) and the Florida Fish & Wildlife Conservation Commission (FWC) under conditions not harmful to this or other turtles. Images were acquired while conducting authorized research activities pursuant to FWC MTP-18-205.

Loggerhead Marinelife Center researchers have received a grant to study the impacts of the fire ant pesticide AMDRO® on the reproductive success, hatchling quality and sea-finding behavior of loggerhead sea turtles.

Sea turtle nests are constantly vulnerable to poaching, nest inundation, climate change, invasive pests and predators, among other obstacles. Fire ants are one of the invasive pests found in Florida, and they can cause havoc on beaches and marine life as well. When fire ants build their mounds near the coast, the already-threatened sea turtle hatchlings emerging from their nests are sometimes preyed upon by the ants, preventing the hatchlings from ever reaching the ocean and thereby continuing to reduce sea turtle survival rates. To date, little research exists on the effects of fire ant control methods on sea turtles.

Enter AMDRO®, a pesticide that could help combat this problem along our beaches. Partly made of cornmeal, this pesticide is slow-acting by attracting the ants and enticing them to bring bait back to their nest, thereby eliminating the entire colony. Additionally, AMDRO® is not water soluble, meaning it stays on the top layer of sand, preventing it from leaching down and possibly reaching sea turtle nests and other organisms below the surface.

While researchers did not find any negative effects on reproductive success or hatchlings, preliminary results indicate that the presence of AMDRO® on the sea turtle nests may have attracted more predators to the nests, as more fire ants were noticed on our beaches this year than in previous years. While this is one small drawback, researchers can make recommendations on where to place this bait. Typically, the pesticide is placed directly on top of sea turtle nests. This study shows that perhaps that is not the best course of action for the future. Trying to identify the location of the fire ant colony and placing the bait near the colony instead of on top of the sea turtle nest would likely mitigate this drawback. 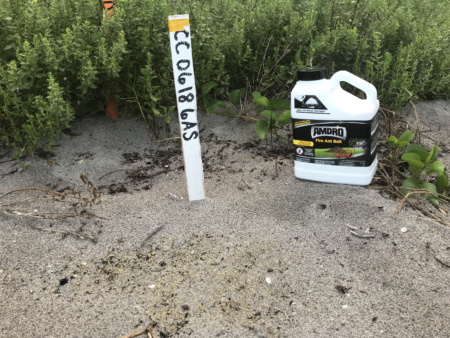 AMDRO and nest. All marine turtle images taken in Florida were obtained with the approval of the U.S. Fish & Wildlife Service (USFWS) and the Florida Fish & Wildlife Conservation Commission (FWC) under conditions not harmful to this or other turtles. Images were acquired while conducting authorized research activities pursuant to FWC MTP-18-205.

While the study is still in progress, initial results are promising. Loggerhead Marinelife Center researchers are collecting additional data to see if any of the animals that were sampled contained the pesticide in their tissues. While the results are still pending, preliminary analyses suggest that the pesticide remains in the top three inches of the sand and likely does not ever leach into the egg chamber.

“These results are encouraging. Currently there are no safe and effective ways to control these invasive predators, and this study shows that we may have found a solution,” said Dr. Justin Perrault, director of research at Loggerhead Marinelife Center.

For more information about the study, contact Dr. Justin Perrault, director of research at Loggerhead Marinelife Center, by emailing jperrault@marinelife.org.

Loggerhead Marinelife Center is a nonprofit sea turtle research, rehabilitation and educational institution that promotes conservation of ocean ecosystems with a focus on threatened and endangered sea turtles. The Center features an on-site campus hospital, research laboratory, educational exhibits and aquariums, and also operates the Juno Beach Pier, which hosts world-class angling and sightseeing. Situated on one of the world’s most important sea turtle nesting beaches, Loggerhead Marinelife Center is open daily and hosts over 350,000 guests free-of-charge each year. The Center’s conservation team works with 76 local and international organizations across six continents to form partnerships and share conservation initiatives and best practices that are core to its mission of ocean conservation. The Center is expanding and has launched its Waves of Progress capital expansion campaign, designed to accelerate and amplify LMC’s conservation and education impact. When complete, the facility will offer one of the world’s most advanced and unique experiences for guests and scientific partners. For more information, visit marinelife.org or call (561) 627-8280.