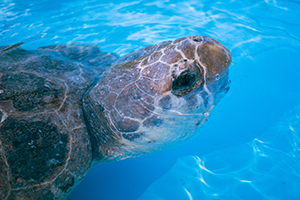 What: LMC will release Gavin the sea turtle from its facility off Juno Beach.

Gavin is a large sub-adult loggerhead that was found in the Intracoastal Waterway at DuBois Park with a hook embedded in its skin near the right front flipper. The initial bloodwork showed anemia and overall poor health due to starvation. Hospital staff administered fluids, antibiotics, iron, and vitamins. Gavin was also started on once-daily parenteral nutrition supplementation. The turtle was put into freshwater to remove epibiota and leeches that covered its body. Gavin will be fitted with a satellite transmitter so we can follow his movements after his release. Guests who are not able to attend the release will be able to track the turtle on our website.

Gavin will be prepared for release from LMC starting at 10:30 a.m. LMC docents will convey the history of the turtle’s journey and final preparations to visitors, with a procession to the beach for the release to follow. We recommend arriving early for parking and to find a good spot on the beach.

Loggerhead Marinelife Center is a nonprofit sea turtle research, rehabilitation and educational institution that promotes conservation of ocean ecosystems with a focus on threatened and endangered sea turtles. The Center features an on-site hospital, research laboratory, educational exhibits and aquariums, and also operates the Juno Beach Pier, which hosts world-class angling and sightseeing. Situated on one of the world’s most important sea turtle nesting beaches, Loggerhead Marinelife Center is open daily and hosts over 350,000 guests free-of-charge each year. The Center’s conservation team works with 76 local and international organizations across six continents to form partnerships and share conservation initiatives and best practices that are core to its mission of ocean conservation. The Center is expanding and has launched its Waves of Progress capital expansion campaign, designed to accelerate and amplify LMC’s conservation and education impact. When complete, the facility will offer one of the world’s most advanced and unique experiences for guests and scientific partners. For more information, visit marinelife.org or call (561) 627-8280.