Dr. Justin Perrault, Director of Research at LMC, contributed to this blog post.

Dr. Perrault was invited by his collaborator, Dr. Ronel Nel, associate professor in Marine Ecology at Nelson Mandela University. Dr. Nel is a 2018 Pew Marine Fellow who received funding for a project to determine if South Africa’s sea turtles are “refugee” species.

“Refugee” species are threatened and/or endangered animals whose populations may not increase due to not being conserved in an efficient manner. For example, the nesting beach is protected in Africa; however, perhaps the nesting beach is not the optimal site to increase conservation efforts, and instead, sea turtles may need more protection on their foraging grounds (by limiting fishing/boating, etc.) Refugee species oftentimes have decreases in fitness, and the future of their populations are uncertain. 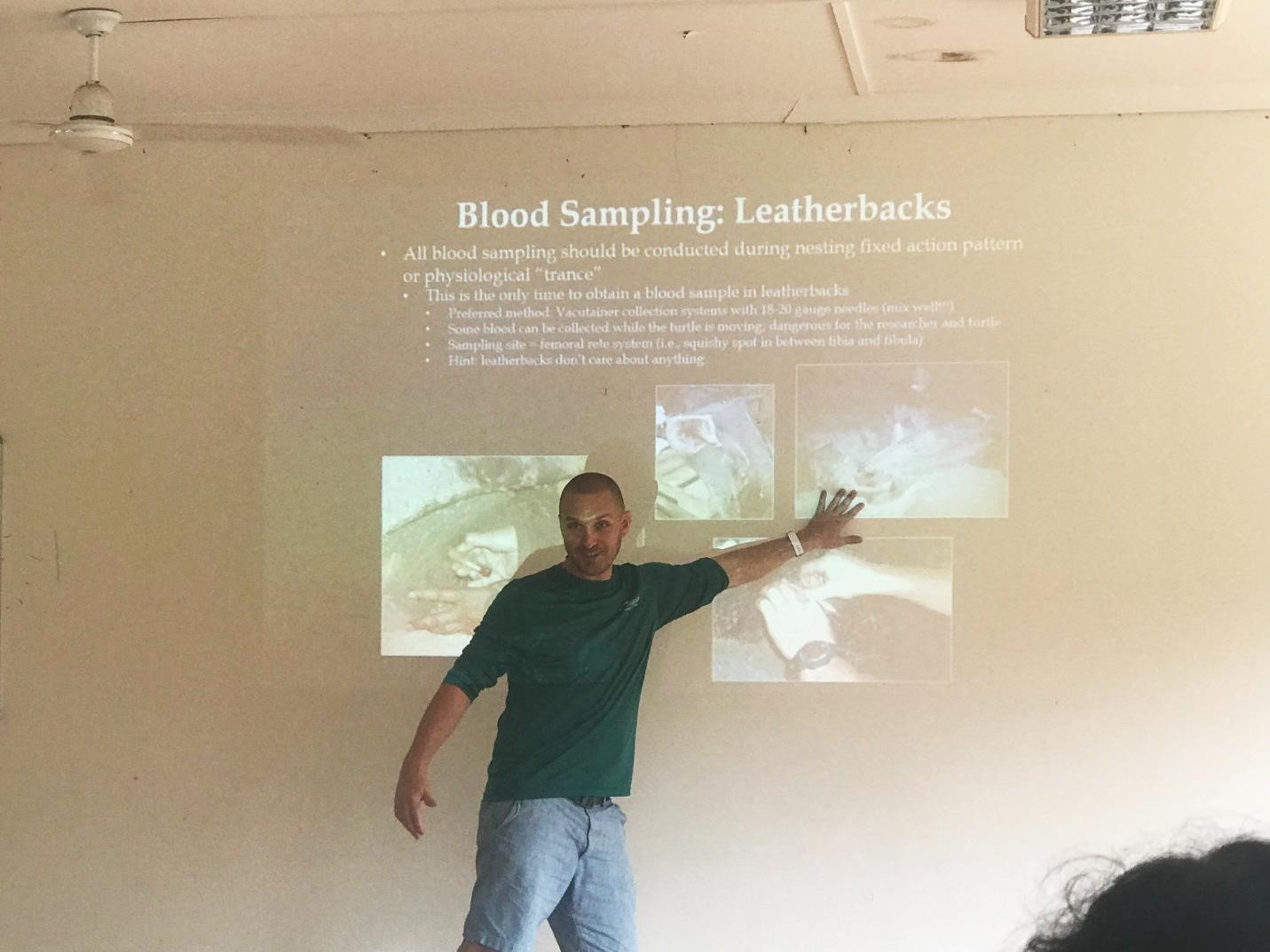 This concept has only been applied to terrestrial (land-based) animals so far, and Dr. Nel will determine whether it can also be applied to marine species (https://www.pewtrusts.org/en/projects/marine-fellows/fellows-directory/2018/ronel-nel). Because sea turtles are sentinel species, meaning they help tell us about the health of the oceans, a portion of this study will examine the health of the turtles, as effective conservation works only if you also have healthy animals. This project is especially important for South African leatherbacks: despite numerous conservation measures, their population has remained small, yet stable, for five decades. With efficient and appropriate protections, threatened populations should grow.

In comes Dr. Perrault. About a year ago, Dr. Nel reached out to Dr. Perrault to provide advice on sample collection and which health parameters would be best to examine. After weeks of communications, it was decided that Dr. Perrault would collaborate on this project and make a two-week trip to South Africa to assist in training of proper blood collection and processing protocols. His excursion began on December 2.

First, there was a flight from Fort Lauderdale to Dubai (16 hours) followed by a flight from Dubai to Johannesburg (8 hours). Then came a flight from Johannesburg to Durban (1 hour), and wrapping it all up was a five-hour drive to the iSimangaliso Wetland Park UNESCO World Heritage Site in the eastern portion of South Africa on the Indian Ocean. There, Dr. Perrault gave two lectures to students, staff and collaborators on proper blood collection protocols and research activities conducted at Loggerhead Marinelife Center. 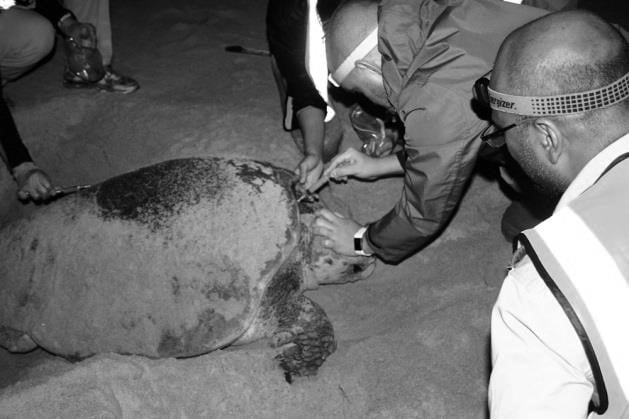 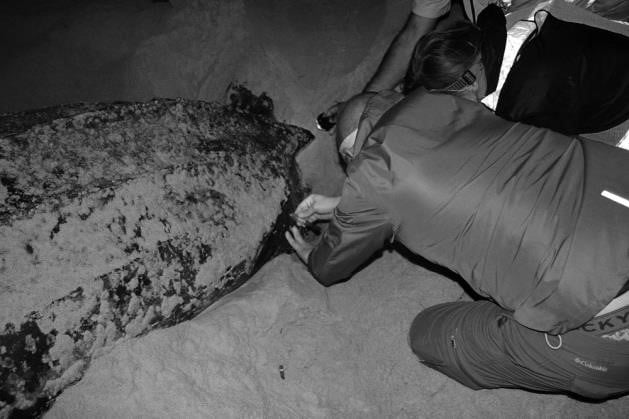 After the lectures, it was time to test Dr. Perrault’s expertise. He could talk all day about how to take blood, but the real test lies with performing your skills in front of an audience. Dr. Perrault and his colleagues set out on the nesting beach and had some amazing luck. On the first night, they encountered two leatherbacks and several loggerheads. From the loggerheads (top photo), the external jugular vein serves as the venipuncture site, meaning the ideal place to draw blood. In leatherbacks (bottom photo), the jugular vein is too deep to reach with a needle; therefore, the rete mirabilis (“wonderful net”) system is used. This site, located in between the tibia and the fibula, is a series of dozens of blood vessels that serve as countercurrent heat exchangers to keep the extremities of the animal warm during their prolonged, and often chilly, dives.

Dr. Perrault was most impressed by the beauty of the beaches and the size of the South African leatherbacks. They are huge. The largest animal on record had a shell that measured 203 cm curved carapace length (80 inches!) These animals are much larger than the leatherbacks that we encounter in Florida. Why this is the case is unknown, but it is likely due to differences in migratory patterns and potential differences in available food. The blood collection from both species was a success, and about a dozen samples were banked during Dr. Perrault’s visit, ensuring the future success of this project. 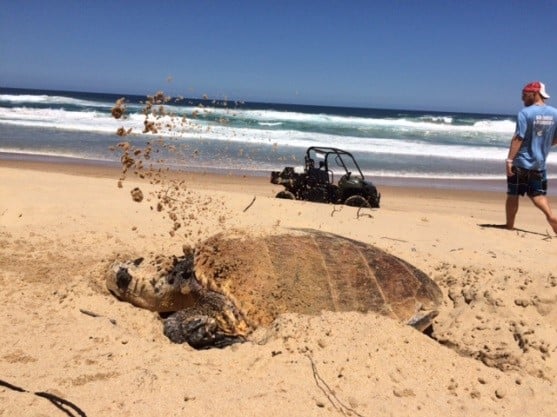 Some other highlights of the trip included a day-nesting loggerhead, and of course, the vervet monkeys that often tried to break into the refuge house, and the insects (the dung beetles were a personal favorite). 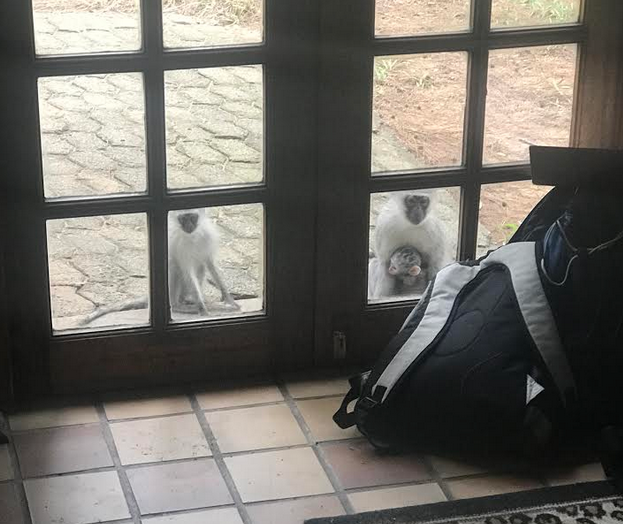 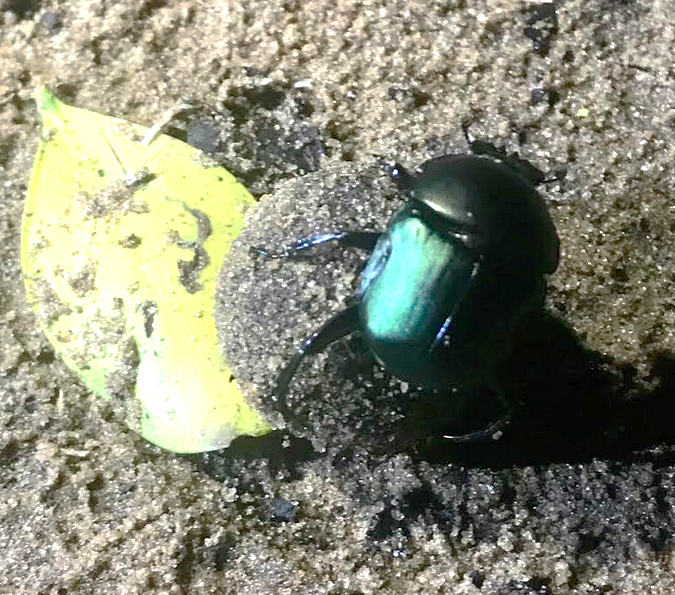