Did you know that Florida’s Coral Reef is the 3rd largest barrier reef system in the world? Florida’s Coral Reef stretches from the Dry Tortugas to the St. Lucie Inlet, spanning the entirety of the Palm Beach County coastline. It is home to over 40 species of coral that provide shelter and habitat for thousands of marine species. The diversity of life supported by coral reefs has earned them the name “Rainforests of the Sea”. Coral reefs protect our shorelines from erosion among many other ecosystem services, and they rely on us to keep the ocean healthy so that they can thrive.

As important as coral reefs are for our ocean’s 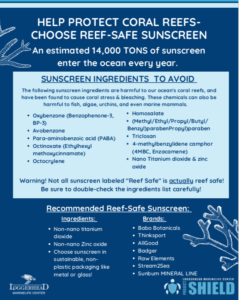 health and biodiversity, they face a multitude of global threats that are rapidly causing coral bleaching and death. Stressors, including rising global temperatures, overfishing, plastic debris, and invasive species have put our planet’s coral reefs at risk, but did you know that the sunscreen choices you make could also be a cause for concern?

Many well-known sunscreen companies are not safe for our marine ecosystems and are toxic to corals and reef fish. Don’t be fooled by labels, there are no commercial standards as to what is considered “reef safe,” and there are a few ingredients that should never be included in an ingredient list. The most common harmful ingredients include oxybenzone, octinoxate, homosalate, and avobenzone among many others.

Over 14,000 tons of sunscreen enter the ocean every year, and wearing reef-safe sunscreen is a great way to maximize your positive impact on the ocean. Even if you apply sunscreen to go to the pool or to enjoy some time outdoors, the chemicals in sunscreen can still make their way to the ocean through the drain in your shower or sink.

Wearing reef-safe sunscreen is a great way to maximize your positive impact on the ocean and a sustainable choice that is not at the expense of your skin! Loggerhead Marinelife Center is proud to now have a free, reef-safe sunscreen dispenser at its seaside campus in Juno Beach generously donated by Tiki Hut Livin and in partnership with the Richard David Kahn (RDK) Melanoma Foundation. The dispenser is available to visitors and filled with Stream2Sea, the first biodegradable & reef-safe sunscreen. This will serve as a mobile dispenser for ocean-centered community events.

Additionally, many reef-safe sunscreens can be purchased at LMC and local surf shops, bonus points if they are not sold in plastic containers! Other ocean-approved sunscreen brands to look for include Babo Botanicals, Raw Elements, Amavara, and Thinksport.