LMC’s Director of Researcher, Dr. Justin Perrault, discovered an interesting wound on the head of a nesting leatherback sea turtle named Windy. Initially, the team was participating in a larger study documenting injuries on turtles that nest on local beaches monitored by LMC, but this inquiry led them to discover much more.

Although rarely documented, scientists have long suspected that species like the tiger shark and bull shark will feed on sea turtles. However, the researchers from this study were surprised to learn that white, dusky, sandbar, and mako sharks were also documented.

Windy, a leatherback sea turtle, who was

originally tagged in 2003 on Juno Beach was re-encountered in 2019 with healed injuries on the head and front left flipper. Based on the distance of the scars it is estimated that this injury was caused by a 4.2-meter (13.7-foot) tiger shark. Jolene, another turtle with shark wounds, was originally tagged on Juno Beach in 2010 and returned to the nest in 2020 with a partially healed shark bite to her head. Forensic analysis of the tooth patterns, or "rake marks," indicate that this injury was caused by either an 11-foot longfin mako shark or a 13-foot white shark. 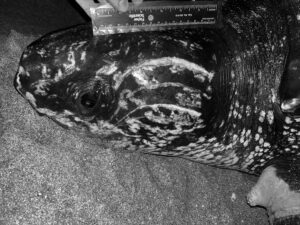 This study provides interesting insight into the natural predators that consume sea turtles, as well as the behavioral interactions between sharks and turtles.

To read the full manuscript visit: https://www.int-res.com/abstracts/meps/v703/p145-159/ All images taken for this study were acquired under authorized Florida Fish and Wildlife Marine Turtle Research Permit 205. Flash photography is permitted for this study and only occurs during or after egg deposition when the turtles are unresponsive to external stimuli. The researchers stay with the nesting turtles until they return back to the ocean to ensure that no negative impacts on sea findings occur.

Posted in Other, Research
← TurtleFest 2023 — See you March 18!Dr. Heather Barron Speaks at the Largest Vet Conference in the United States →
Book Now