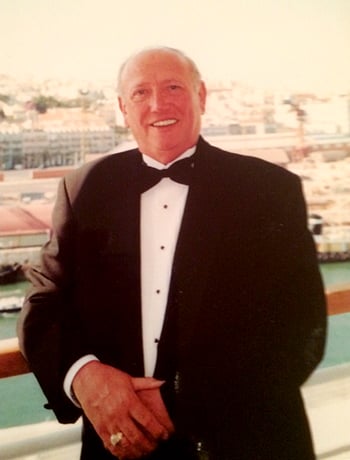 Dr. Lighton was born in 1938, in Muskegon, Michigan to George and Myra Lighton.  A very hardworking young man, he assisted his mother with her finances by working multiple paper routes after the sudden loss of his father George.

From a very young age, Dr. Lighton was always fascinated by the healing art and science of medicine.  He attended Wayne State University in Detroit, Michigan, pursuing a degree in pre-med and went on to attend the Chicago College of Osteopathic Medicine.

Dr. Lighton interned at St. John’s Hospital in Detroit, Michigan, where he pursued general and vascular surgery.  Upon completion of his residency, he established his medical practice in Mount Clemens, Michigan, at Mount Clemens General Hospital (now McLaren Macomb).

During his early years as a surgeon, Dr. Lighton met his loving wife, Marilyn, and together they built their family and a dynamic network of philanthropic support for Mount Clemens General Hospital. Together Dr. Lighton and his wife Marilyn Lighton created fundraising events within their network, raising first-of-their-kind scholarship funds for exceptional medical students and for the procurement of advanced medical equipment.

Dr. Lighton was the Chairman of the Department of Surgery and Chief of Vascular Surgery at Mount Clemens General Hospital. After receiving his fellowship in Vascular Surgery, he went on to build one of the largest and most well-respected general and vascular surgical practices in the Midwest.

Dr. Lighton’s surgical accomplishments were second to none. He is noted for leading some of the most complex surgical procedures ever conducted internationally, saving the lives of thousands of patients. One of Dr. Lighton’s most advanced surgeries was, “A Complete Traumatic Hemipelvectomy.” A case-review of this procedure was published in 1974, celebrating the survival of the patient and Dr. Lighton’s profound surgical skills.

Dr. Lighton and his wife, Marilyn Lighton, raised their family in Grosse Pointe Farms, Michigan.  A longtime member of the Grosse Pointe Yacht Club, he was an avid boater and advanced marine navigator.  Dr. Lighton enjoyed his summer boating vacations where he would spend time with family and friends, navigating throughout the Great Lakes, with a favorite stop-over at Beaver Island.  The Lighton family has a long history on Beaver Island. When describing this special island in the middle of Lake Michigan, Dr. Lighton’s stunning blue eyes would light up with joy; he truly cherished his “island time.”

Dr. Lighton retired with his wife Marilyn in the 1990s and moved to their home on Jupiter Island, where they became very involved in the community as members of the Maltz Jupiter Theater and Loggerhead Marinelife Center.

During his retirement, Dr. Lighton became one of the world’s most preeminent experts and educators on wound care, educating more than 5,000 doctors in his role as Senior Leader of Education at National Healing Corporation (now Healogics).  Dr. Lighton was appointed to the speaker’s bureau of the prestigious Association for the Advancement of Wound Care Education Lectures and helped pioneer advancements in non-healing wound care therapies, technologies, and treatments.  Dr. Lighton taught at The Ohio State University (though a rabid University of Michigan fan) and traveled the world visiting wound care centers to educate, train, and deploy the latest advancements in wound care technology – improving the quality of life for thousands of patients and their families.

Dr. Lighton was appointed Clinical Associate Professor at Michigan State University in the Department of Osteopathic Surgical Specialties and was a well-known lecturer, teacher, and mentor to many doctors and residents.

Dr. Lighton lost his wife, Marilyn, (“the love of his life”) to Idiopathic Pulmonary Fibrosis (IPF) but went on to lead an active life centered around his family and his friends. He also traveled internationally with his dear friend, Marilyn Driscoll and created a significant philanthropic legacy within his community.

Dr. Lighton was the acting President of the Beach Road Association of Jupiter Island, a member of the Maltz Jupiter Theater, supported veterans, advocated for autism, and was a member of Loggerhead Marinelife Center’s Circle of 100.

Dr. Lighton’s love for life was apparent by all who met him.  He took great joy in relaxing with his dog “Captain” while gazing out at the ocean and the Intracoastal Waterway, cherishing each sunrise and sunset; often capturing stunning images of earth’s magical beauty which he shared with those he loved.

Dr. Lighton was preceded in death by his mother and father, his beloved wife Marilyn Lighton, and his dear friend, Marilyn Driscoll.