Blue Hatchling of the Year Finalists: 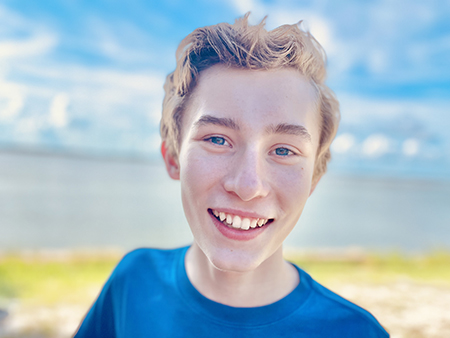 Growing up in Florida, Ryan was fascinated by the ocean. At age 3 he would explore the local beaches during low tide, mesmerized by the sea creatures he would find.

At four, Ryan began to read ocean themed books. One book in particular had a profound impact on him, as it outlined the detrimental effect trash had on our ocean and its creatures. As a result Ryan began bringing a bag with him each time he would visit the beach so he could pick up any trash. During one of these beach cleanups, Ryan saw a tire being rolled directly into the ocean.

This experience was the catalyst that began his conservation project, The Fishes Wishes, and also inspired his first book, entitled "Puffy the Puffer Fish Saves the Ocean." The goal of his project is to bring awareness to the issues that are negatively impacting the oceans and raising money to donate towards its conservation.

Throughout the past ten years, Ryan has organized and participated in numerous beach cleanups, sea oat plantings and mangrove plantings. He has also raised over $12,000.00 in a variety of fundraisers as well as through the sales of his ocean themed magnets and suncatchers.

Ryan has also been inspired to make sculptures utilizing the trash he collects on the beach. Additionally he has been invited to show his artwork at several galleries throughout Florida. He loves using art to bring awareness to the problem of pollution in our waters, while repurposing trash that would otherwise despoil our oceans.

Ryan is currently writing his second book titled InspirOCEAN which will be available in October of 2021. During the writing of his book, Ryan was incredibly blessed to interview an array of famous athletes, artists and musicians that are also passionate ocean conservationists. He did this in an effort to emphasize the importance of keeping our oceans clean.

I'm honored to nominate Ryan Moralevitz for the 2021 Go Blue Awards Blue Hatchling Youth Award. I first met Ryan when he was just five years old through the annual Youth Ocean Conservation Summit I run in collaboration with Mote Marine Laboratory. Through his winning submission in our annual film festival, and our first interactions, Ryan's passion for protecting our ocean planet and its inhabitants immediately stood out to me. Over the past 10 years, it has been an incredible journey to watch Ryan turn his passion for the ocean into a powerful force for good, directly educating and inspiring other young conservation advocates around the world while driving restoration, education, fundraising, and advocacy work through his organization The Fishes Wishes.

Over the years, building on his Fishes Wishes platform, Ryan has organized cleanups, mangrove and dune restoration projects, and educational events for Global Youth Service Day, impacting the local marine environment on Florida's Gulf Coast while providing an avenue for his peers to engage in conservation work. Through the Youth Ocean Conservation Summit, Ryan has been awarded a variety of grants to support his efforts, and our grantee review team is always impressed by his outstanding impact and the continued expansion of his work.

Ryan's selfless focus on supporting the ocean conservation causes and organizations he's connected with throughout his work is inspiring. By partnering with local businesses, organizing an auction fundraiser, selling ornaments/magnets and his book, "Puffy the Pufferfish Save the Ocean", Ryan has raised over $3,000 which he has donated to support conservation organizations including our work with the Youth Ocean Conservation Summit, the University of South Florida's Marine Biology Camp, and the Ocean Conservancy. Ryan has also led outstanding work to reach new and nontraditional audiences with ocean conservation messages. Through the creation of innovative marine debris sculptures which have been displayed at local businesses, restaurants, and even the Superbowl, Ryan has greatly expanded the reach of his work.

In my experience with thousands of young ocean leaders around the world, Ryan's work stands out to me for his steadfast dedication to creating tangible, sustainable ocean conservation impact. His enthusiasm, hard work, innovation, and passion are perfectly aligned with the vision of Loggerhead Marinelife Center's Go Blue Awards, and I cannot think of a more deserving recipient for this year's Blue Hatchling Youth Award. If you have any questions please feel free to contact me. Thank you!

(These are events Ryan has participated anually since 2006)

He is planning his ten year celebration in February of 2021 and though he hasn't finalized his ideas yet he is sure he wants to organize a large cleanup. 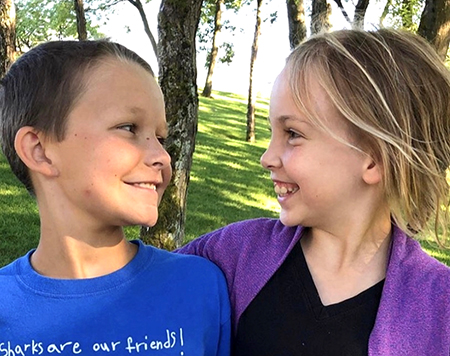 I am honored and thrilled to nominate the incredible youth duo, Ella Grace Galaski-Rossen and Cash Daniels, who are together known as "THE CLEANUP KIDS". Ella and Cash exemplify the spirit of conservation, not only in how they talk to educate others about the importance of preserving our oceans, but even more so by how they lead by example with their actions. Ella and Cash collectively have cleaned up thousands of pounds of trash from our waterways.

Although neither of them live on the ocean, they understand that if they clean up the trash upstream, that they are effectively preventing that trash from entering the oceans, and in turn injuring or killing our precious marine life. Together, after attending Ocean Heroes Bootcamp decided they would start a campaign to protect the waterways from discarded fishing line.

They have installed more than 20 monofilament receptacles along the river, to prevent the fishing line from ending up in the water as a threat to nature. I have personally taken both kids diving, and seen the passion for nature that they both have. The Cleanup Kids have started what they like to call a "tidal wave of change", and are actively recruiting other kids to join their cause and sign up to run cleanups and plastic audits in their own towns.

Their goal is to be able to clean up an impressive 1 million pieces of trash, and I am thrilled to say they are well on their way. The Cleanup Kids have helped on several conservation campaigns that I have run, from the land based fishing campaign, to the "save the Goliath Grouper" to the Red Tide campaigns. They were both also active voices in the campaigns to help pass the cetacean anti-captivity bill, as well as the Shark fin import/export ban in Canada.

The kids research, write and produce a weekly video series to help educate other kids about the importance of acting now to protect our oceans. Both kids are accomplished public speakers, speaking in settings from Sea Shepherd gala events, to schools, Girl/Boy Scouts and even to the elder generations in retirement homes, as well as being features in several conservation documentaries.

Their passion for reducing single use plastic, eating vegan for the planet, and their relentless drive to educate, act, and make the planet a better place is nothing less than heroic. They are THE conservation leaders of their generation, and I am so incredibly grateful to be a mentor to them both, as well as call them both my friends.

I proudly and whole heartedly nominate Ella and Cash for this years Blue Hatchling award. I can't imagine a better choice than these two dedicated youth, who I am confident, together WILL change the world for the better.

Experience: • Founders of a non-profit, leading fundraising campaigns to give back to Ocean Conservation with over $13,000 donated to date. This has also enabled  participation and partnerships with direct action conservation efforts such as, but not limited to, adopting Super Corals in French Polynesia, symbolically adopting sea turtles, and working together to make sustainable jewelry with proceeds going to ocean conservation partners. • Ambassadors for Stream2Sea, Nakawe Project (closed Hook ambassador for Shark Conservation and awareness for Long Lines), 4Ocean, AnimalStone, Shelby Reef, FishGods, Barrel Bag and the UN 17 Goals to Transform the World.

• Extensive experience with volunteering, heading up cleanup efforts around the US and Canada with over 15,000 pounds of trash removed from shorelines along the  ocean and rivers. This poundage does not include efforts in which we partnered  with other groups such as 4Ocean, Living Lands and Waters, Keep the Tennessee River Beautiful, Keep America Beautiful and Sea Shepherd on cleanups for a more widescale effort. • Recycling program leaders focusing on aluminum while educating people to refuse plastics due to their harmful effects on our environment. 10,000 pounds of aluminum has now been recycled from local businesses as well as community partners. • Public speakers who have spoken at state, and national events, including but not limited to: Sea Shepherd, Tennessee Recycling Coalition, The Kelly Clarkson Show as well as city and state government offices. In addition, hosted Zoom presentations with Nakawe Project, National Geographic photographers Jim Abernethy and Filipe DeAndrade as well as sea turtle biologist Christine Figgener and several schools globally.

• Spearheading campaigns to tackle fishing line along rivers and coastlines to reduce risk of animal entanglement. We have placed 20 monofilament receptacles to date with funding from grants awarded by the Youth Ocean Conservation Summit as well as Ocean Heroes Bootcamp. • YouTube creators raising awareness for our oceans, climate change, wild places and natural areas with conservation focused videos written, edited and filmed by kids, for kids. • Attended several conservation-focused camps and seminars including Ocean Heroes Bootcamp, Earth Echo summit and Youth Ocean Conservation Summit. As well as being members of The Wayfinder's Society which brings attention and promotes action for ocean conservation • Participate in Climate Strike and Global calls to action for Climate change as well as Empty the Tank advocates and helped pass Canadian Bill S-203 to ban the captivity and breeding of Cetaceans in Canada. Secured Proclamations from local government regarding watershed protection. • Authored and illustrated "One Small Piece" which tells the story of how plastic inspired one kid to change the world, one small piece at a time. More books are planned all with a conservation focus. Awards: 2021 Youth Making Ripples film competition winner for Middle/Elementary School. 2021 UN Decade for Sustainable Development film award. 2021 Prudential Spirit of Community National Honoree. This award is given to the top 10 youth volunteers in the US with more than 26,000 applicants this year. 2019, 2020, 2021 Youth Conservationist of the Year with Tennessee Wildlife Federation. 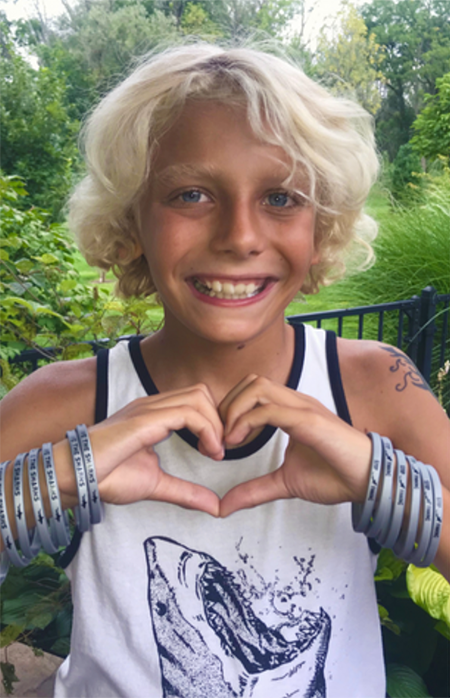 After watching Shark Week several years ago 13 year old Caden Stuermer became obsessed with saving sharks. He learned about how many sharks are killed each year for shark fin soup and other products. His family took a vacation in Florida when he was 11 and he was able to snorkel with sharks off the coast of Jupiter. Caden learned how important sharks are to the marine ecosystem and made it his mission to try to help raise awareness and protect them.

This incredible young man came up with the idea to create his own brand of wristbands which donates all proceeds to various organizations that save sharks. The metal wristbands are silver in color with black lettering that say "Save the Sharks" and "Stop finning" and also have little sharks on them.

Caden says "The reason I want to save sharks is because 100's of millions of sharks are killed every year for their fins and meat. They are going extinct and if we do nothing about it there will be no sharks left. It will be so sad without them 🙁 PLEASE help me to save sharks!!!!!!"

Please accept this nomination of Caden Stuermer for the 2021 Blue Hatchling of the Year.