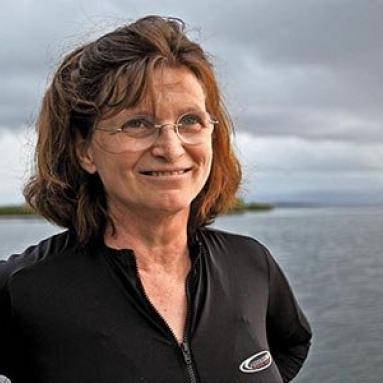 Dr. Nancy Knowlton is a coral reef biologist and a former Sant Chair for Marine Science at the Smithsonian National Museum of Natural History.

Dr. Knowlton is the author of Citizens of the Sea a book published by National Geographic in 2010 to celebrate the end of the Census of Marine Life, a global research collaboration that she chaired. Dr. Knowlton received the Heinz Award, is an Aldo Leopold Leadership Fellow, was elected to the Board of the American Association for the Advancement of Science (AAAS) and was elected a member of the US National Academy of Sciences.

Dr. Knowlton has devoted her research career to understanding and conserving the diversity of life in the ocean, particularly on coral reefs. Her work has spanned the fields of behavior, ecology, conservation, systematics, and evolution, studying organisms as diverse as microbes, corals and crustaceans. She is a thought leader in the role of women in marine sciences and helped popularize the field of 'ocean optimism' and focusing on the important progress that has been made in evidence-based conservation.

Dr. Knowlton's technical area of expertise is on the responses of corals and coral reef ecosystems to major disturbances. Her laboratory uses molecular genetics tools to distinguish and compare organisms that are difficult to characterize using traditional methods. These approaches have led to the realization that many so-called species are large complexes of cryptic species that are reproductively isolated. Her work showing that the microscopic algae living within coral tissues differ in their sensitivity to temperature has had important implications for predicting the response of coral reefs to global warming. Most recently, she has pioneered the use of DNA barcoding and next-generation sequencing, coupled with standardized sampling protocols, to determine how many species live on coral reefs.

She has authored more than 260 scientific articles and books.

Richard Walesky is not a household name, but his work during the course of a 30 year career, preserving PBC's marine heritage positively impacts every County resident and its many thousands of visitors each year. He created PBC Department of Environmental Management and during his 24 year tenure he has helped to ensure that our beaches continue to welcome leatherback, loggerhead and green sea turtles during nesting season. As the first director of PBC ERM, he institutionalized stewardship of PBC's public lands and waters. He is truly a life-time achiever of many marine conservation goals other counties and states are still working to accomplish.

DETAILED NARRATIVE
A motto of the environmental movement is "think global, act local." Throughout his career, Rich Walesky has done just that.

While his is not a household name, it is safe to say that no one has done more over the last three decades than Rich to conserve Palm Beach County's marine heritage.

In 1987, appointed first Director of the new PBC Department of Environmental Resources.

To appreciate his lifetime contributions, one must think back to the mid-80s. Conservation initiatives we take for granted today were nascent or non-existent. In 1987, Rich was tapped by the Palm Beach County Commission to become the first Director of a newly formed entity: the PBC Department of Environmental Resources (ERM). Lauded as a visionary who could get things done, Rich held the post for 24 years, retiring in 2011.

As ERM Director, he created a muscular agency that set conservation standards, promoted sustainability engaged citizens, and drew support from legislators. ERM, as defined and managed by Rich, became a model for other Florida Counties.

Rich Walesky created and implemented policies and programs that were ahead of their time, built a top-notch department that remains a civic model today and oversaw myriad projects- from beach restoration for sea turtle nesting and artificial reef installations, to cleaning up waterways.

He educated the public, persuaded politicians, and provided expert leadership for a new generation of conservationists in the County. Highly experienced and extremely personable, Rich used his deep knowledge, drive, persuasiveness, and ability to see future challenges to get things done.

In doing so, he created an agency within Palm Beach County that others in the state and across the nation admire and copy.

How Rich created a County model for marine conservation:
Rich was a tenacious and daring Director who put in place many of the policies and programs that make Palm Beach County a model in marine conservation. Thanks to Rich's leadership, PBC has hundreds of acres of restored mangroves and seagrasses, improved water quality in the Lagoon, thriving artificial reef systems and effectively managed shorelines.

During my 28-year tenure as County Commissioner, I worked closely with Rich. No one has done more for marine conservation in Palm Beach County, day in day out in the last three decades than Rich Walesky.

Since his retirement, Rich continues to advocate, educate, and act.
He teaches students of all ages, models' best practices, and serves on the Board of Sustainable Palm Beach County, where he brings his considerable energy and knowledge to bear on our marine conservation efforts.

Thanks to Rich's tireless efforts, Palm Beach County residents and visitors can enjoy our green space, natural areas, clean waters, sand, and sea. And three species of the world's sea turtles can return to nest on the PBC beaches where they were hatched. 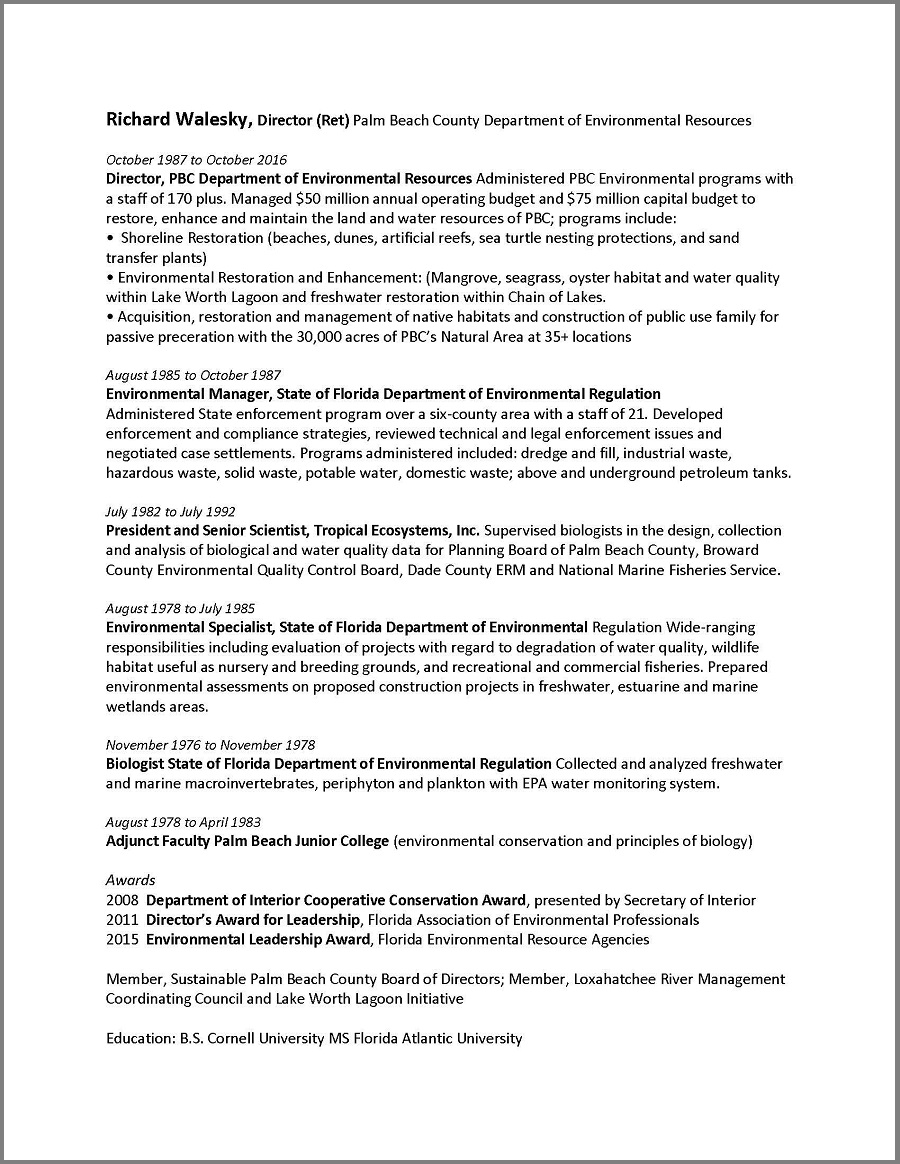 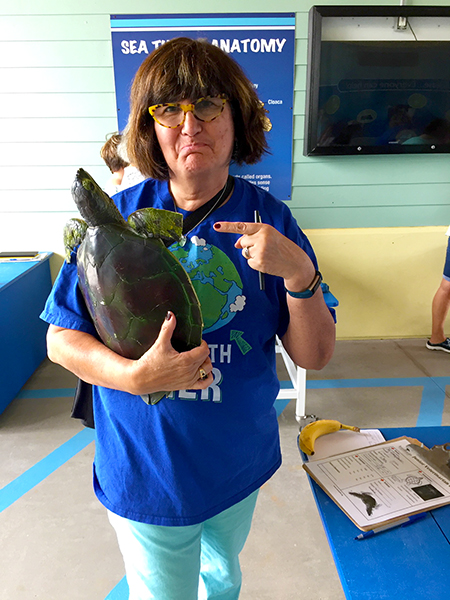 On behalf of the Education Department at LMC, we would like to nominate Mrs. Gayle Zavala for a Go Blue Award. Gayle recently retired from the School District of Palm Beach County where she served over 35 years teaching Special Education, Reading, STEAM, and English Language Learners. In recent years, as the STEAM teacher for Gove Elementary School in Belle Glade, Florida, Gayle has inspired our team through her continued dedication to integrating conservation into the classroom and delivering quality environmental education to her students. While the students of Belle Glade have limited access to ocean resources, being located more than 1.5 hours from the coastline in Florida, Gayle strived to bring marine science and the Atlantic Ocean ecosystems to them. Through water quality labs, junior vet lab activities, field trips to local ecosystems such as the Everglades, and by bringing real marine scientists into the classrooms, all students at Gove Elementary School over the years (grades K-6) were continuously immersed into conservation topics. Gayle has exemplified a lifelong, extraordinary commitment to marine conservation. The students of Palm Beach County and our team here at Loggerhead Marinelife Center are lucky to know such an educator.

When visiting Gove Elementary School, the impact that Gayle Zavala has had throughout her teaching career is evident from the partnerships she has created to the awards displayed in their hallways. While Gove Elementary is located in Western Palm Beach County, Gayle has made it her mission as the STEAM Teacher to connect her students with coastal and marine ecosystems. By creating a partnership through Loggerhead Marinelife Center, Gayle has provided students in all grades with the chance to participate in lessons such as Water Quality Testing, Virtual Field Trips, and a Virtual Reality Tour of LMC. During her time at Gove, the school was awarded the titles of both FAU Pine Jog Green School and Everglades Champion School because of the initiatives Gayle spearheaded. Speaking with Gayle you can see how much effort and dedication she has put into the lessons and activities she enthusiastically delivers for her students. I have no doubt that throughout Gayle's tenure at Gove Elementary School, she has left countless students with a lifelong fascination of the ocean.

I will say, I only met Gayle once when I had just started my job here at LMC, but she was so welcoming and encouraging from the moment we stepped into her classroom. You can see that her kindness and passion for education translates to her relationship with her students, they have an immense amount of respect for her. Upon leaving that day, she told me that she was impressed with my knowledge, which really inspired me to keep going! She's a wonderful person and I hope she receives the award!