The Eleventh Annual Go Blue Awards recognized individuals and organizations who are leading the community in practicing ocean conservation and are on the leading edge of going "Blue!" Featured special guest and keynote speaker, Dr. Robert Ballard.

Starting on July 15, LMC began accepting nominations for the 2019 Go Blue Awards, which are given annually to four individuals and a business that are making extraordinary contributions by promoting ocean conservation. Nominations were made through August 25. Finalists were announced at a Blue Friends Society social in September. 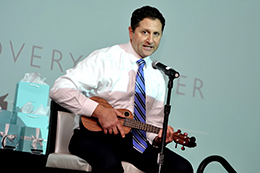 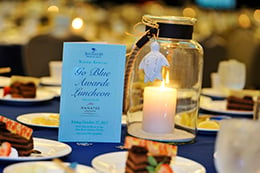 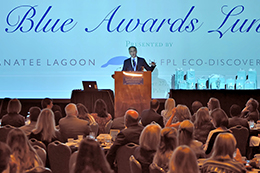 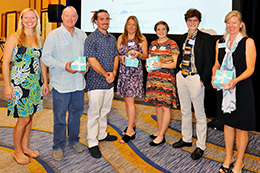 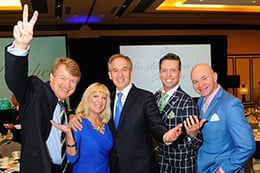 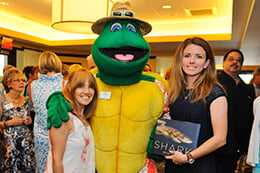 Dr. Robert Ballard Best known for his 1985 discovery of the RMS Titanic, has succeeded in tracking down numerous other significant shipwrecks, including the German battleship Bismarck, the lost fleet of Guadalcanal, the U.S. aircraft carrier Yorktown (sunk in the World War II Battle of Midway), and John F. Kennedy\'s boat, PT-109. While those discoveries have captured the imagination of the public, Dr. Ballard believes his most important discoveries were of hydrothermal vents and \"black smokers\" in the Galapagos Rift and East Pacific Rise in 1977 and 1979.

In 2008, Dr. Ballard founded the Ocean Exploration Trust and acquired his ship of exploration, EV Nautilus. Dr. Ballard is also a National Geographic Society Explorer-In-Residence, a commissioner on the U.S. Commission on Ocean Policy and a Senior Scientist Emeritus in the Department of Applied Ocean Physics and Engineering at the Woods Hole Oceanographic Institution.

Dr. Ballard has a Ph.D. in marine geology and geophysics from the University of Rhode Island. He also has 21 honorary degrees and six military awards. He was a Commander in the U.S. Naval Reserve, serving in the Navy from 1967 to 1997. He received the National Geographic Society\'s prestigious Hubbard Medal in 1996 for \"extraordinary accomplishments in coaxing secrets from the world\'s oceans and engaging students in the wonder of science.\"
​
Dr. Ballard has published numerous books, scientific papers and articles in National Geographic magazine. He has also been featured in National Geographic\'s Secrets of the Titanic and Alien Deep with Bob Ballard TV programs. Additionally, he was a special advisor on Steven Spielberg\'s Sea Quest DSV series. An explorer, discoverer and historian, Dr. Ballard\'s fascinating journeys can teach us a great deal about our past, and they have encouraged others to take tremendous strides in the survey of the undiscovered mysteries of the deep sea.

The Eleanor Fletcher Award, named for the founder of Loggerhead Marinelife Center, recognizes an individual who has exemplified a lifelong, extraordinary commitment to marine conservation through their work or volunteer activities.

The Blue Ambassador of the Year Award recognizes a person who has made significant contributions in marine conservation through volunteer related activities.

The Blue Friend of the Year Award recognizes a person who has made significant contributions in marine conservation through work-related activities.

The Blue Hatchling Youth Award recognizes students up to and including 12th grade who have made significant contributions in marine conservation through volunteer related activities.

The Blue Business of the Year Award recognizes a business or non-profit that has made outstanding contributions toward promoting and encouraging conservation, restoration, or preservation of marine life and/or marine ecosystems through their business practices, products or technology.

*Did not vote in the Eleanor Fletcher Lifetime Award category

Please note, there are no refunds or exchanges for purchased tickets. All sales are final.