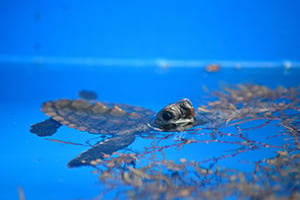 Hatchlings that come to the Loggerhead Marinelife Center did not make it out to the open ocean when they hatched. This is caused by multiple factors. Some of our turtles were simply too weak to make it to the ocean or beyond the point of the wave break. Others were attacked by fire ants or other local wildlife, or some go in the wrong direction. Rather than go towards the ocean (which is the brightest, lowest horizon) they head towards the dunes and road because of lights coming from that direction. Our Hatchlings are held here for about 1-2 weeks. When the Hatchlings are ready for release, they are taken by boat to the Sargassum patches about 10-15 miles out in the ocean.

This turtle is progressing well and responding to therapy as desired.

There is a minor issue that we are working to resolve.

08/26/2019 - We released about 80 hatchlings offshore today. We continue to receive disoriented hatchlings.

11/01/2017 - We released most hatchlings and wash backs last week. We are still getting a few new arrivals, but is has slowed down considerably.

10/04/2017 - We are continuing to receive multiple hatchlings and post-hatchlings daily. Our current post-hatchling count is 19 and we have roughly 200 hatchlings. We are working with the FWC to safely release these turtles in the near future.

09/27/2017 - We are working with he FWC to find sargassum and calm seas to release the 200+ hatchlings/post hatchings we have on campus.

09/17/2017 - Our patients have returned home! We are so thankful for the Georgia Aquarium for taking in our patients during this storm.

09/14/2017 - We received over 200 hatchlings due to Hurricane Irma and they were all released off shore today!

09/07/2017 - All of our sea turtle patients including 40 hatchlings have evacuated to the Georgia Aquarium due to Hurricane Irma. They will remain there with a member of our staff until it is safe to return. For all of our preparation for Hurricane Irma visit HERE.

08/16/2017 - Hatchlings were released 6.5 mile off shore with the help of Jupiter Dive Center. We have already started receiving new hatchlings.

08/10/2017 - A boat released was planned but was canceled due to a lack of sargassum in the Gulf Stream. we will continue to monitor the sargassum situation and release these hatchlings as soon as possible.