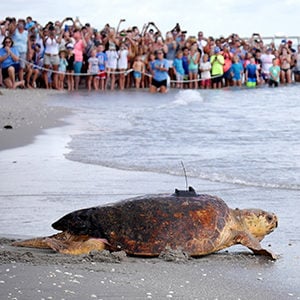 Bovenizer is an adult male loggerhead turtle that was found at the intake canal of FPL's St. Lucie Site on April 14, 2019. Biologists with Inwater Research Group brought the turtle to LMC's Sea Turtle Hospital because the animal was underweight and had a soft plastron (you could see the heart beating through it). Initial bloodwork and radiographs appeared normal, but an ultrasound of the heart and major vessels suggested the presence of endarteritis, an inflammation of the vessels, probably caused by a parasite in the blood.

Bovenizer was treated for internal parasites and follow-up ultrasounds showed signs of improvement. On June 19, 2019 Bovenizer was released from Juno Beach with a satellite transmitter affixed to his carapace. This tracker will allow biologists to follow Bovenizer's movements and behavior post-release.

Update 5/4/2020
We are still getting sporadic transmissions from Bovenizer who is still in the same area off Everglades National Park.

Update 4/2/2020
Bovenizer has remained in the same area off Evergaldes National Park. While transmissions from his tag are sporadic, we are still getting occasional information from Bovenizer’s tag with the last location information being sent on March 29, 2020.

Update 3/02/2020
Bovenizer continues to remain near Everglades National Park. We are getting sporadic communications from Bovenizer’s tag, so last location dates may be a few days old.

Update 1/20/2020
Bovenizer has started to make his way back to the area off Everglades National Park where he took up residence back in late September 2019.

Update 11/25/2019
Bovenizer still remains in the area off of Everglades National Park in the Gulf of Mexico.

Update 10/23/2019
Bovenizer has remained off of Everglades National Park in the Gulf of Mexico.

Update 9/30/2019
After reaching the Marquesas, Bovenizer turned north and then east. The turtle is now off of Everglades National Park in the Gulf of Mexico on the West Florida Shelf.

Update 9/16/2019
After spending around three weeks off the coast of Sebastian, Florida, Bovenizer started swimming south again. The turtle has followed the coastline south and is now located between Key West and the Marquesas Keys. The turtle is in the same area that Harry, the olive ridley we are tracking, is located.

Update 8/26/2019
Bovenizer is still in the same location, off the coast of Sebastian, Florida.

Update 8/9/2019
Bovenizer has continued to travel south and is now located off the coast of Sebastian, Florida.

Update 7/25/2019
Bovenizer has continued to travel south and is now located off the coast of Palm Coast, Florida.

Update 7/2/2019
Since his release, Bovenizer has traveled north along the coast. Bovenizer is currently off St. Augustine, Florida.