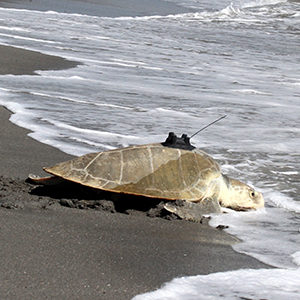 Cupid is an adult female Kemp’s ridley turtle that was captured at the St. Lucie Power Plant Intake Canal by our colleagues at Inwater Research Group on February 14, 2019. The turtle had shark bite injuries to her left front flipper, plastron (under side of her shell), and head so she was brought to LMC’s Sea Turtle Hospital for treatment. The turtle’s wounds were treated topically with honey and a therapeutic laser.

The turtle also showed signs of pneumonia which was treated with antibiotic nebulization. Cupid’s left lung had a severe infection that took months to heal, but the turtle finally began to show signs of improvement. On August 21, 2019, after a six month stay at LMC’s Sea Turtle Hospital, Cupid was released off Hobe Sound Beach with a satellite transmitter.

Final Update 3/02/2020
Cupid continued to move south along the shoreline reaching the Jupiter Inlet on January 21, 2020. Unfortunately, that is when we lost communications with Cupid’s tag, 153 days after the turtle was released.

Update 1/20/2020
Cupid has continued to move south along the Atlantic coastline. Cupid is now currently off of Jupiter Island, right around the area where the turtle was released on August 21, 2019.

Update 1/3/2020
As anticipated, as water temperatures cooled down, Cupid moved south and offshore to warmer waters. After spending some time 20 miles offshore in waters that were approximately 150 feet deep, Cupid started moving closer to the coastline into shallower waters around Melbourne, Florida. The water temperature where Cupid is currently located is around 74°F.

Update 11/25/2019
On November 16, 2019 Cupid began heading south. The turtle is now located off of Titusville, Florida. If water temperatures continue to drop, we expect to see Cupid continue to head south in search of warmer waters. Cupid could also move offshore towards the warm Gulf Stream currents.

Update 10/23/2019
Cupid has remained in the same general area. She is currently off of Palm Coast.

Update 9/16/2019
Cupid has continued to travel north. She exited the ICW via the Fort Pierce Inlet on September 4, 2019 and is swimming in the nearshore waters of the Atlantic Ocean. Cupid is currently off the coast of Canaveral National Seashore.

Update 8/26/2019
Since her release, Cupid traveled north along the coastline and entered the Intracoastal at the St. Lucie Inlet. Cupid is currently in the Intracoastal, just north of the inlet.

Update 8/21/2019
Cupid, an adult female Kemp’s ridley turtle, was returned to her ocean home in a private release at Hobe Sound Beach today.