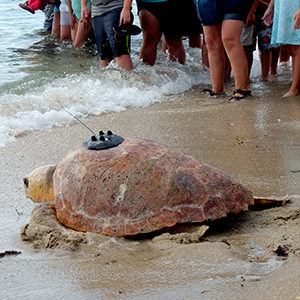 Eau-tis, named for Eau Palm Beach Resort & Spa, is a sub-adult loggerhead sea turtle that was found chronic debilitated in the waterway behind a private home in Jupiter. The turtle was admitted to the Sea Turtle Hospital at Loggerhead Marinelife Center on November 7, 2017.

After 10 months of treatment for anemia, hypoglycemia, and minor surgeries to treat an abscess on the front of the carapace, Eau-tis was cleared for released. With a generous donation from Eau Palm Beach Resort & Spa, LMC was able to purchase a Wildlife Computers satellite transmitter for Eau-tis. This will allow us to track the turtle’s movements to ensure that the turtle is behaving normally post-rehabilitation and release. Eau-tis was released from the beach in front of Eau Palm Beach Resort & Spa on August 14, 2018. Follow this turtle’s journey by clicking on Eau-tis’ photo.

Update 2/25/2019:
We still have not received any information from Eau-tis’ tag since January 20, 2019. Because this tag was damaged and there were clear issues with transmissions, we will continue to monitor for any new information for the next couple of months.

Update 1/30/2019:
We have not received an updated location from Eau-tis since January 20, 2019. The water temperatures in the area where Eau-tis last transmitted from are dropping. We are hopeful that just like Gavin and Honda, that Eau-tis is moving to warmer waters. We will continue to watch for any updates received from Eau-tis’ tag.

Update 1/9/2019:
Eau-tis is still located off of Melbourne, Florida. The turtle’s tag is sending intermittent data but, we are hopeful that we will continue to receive information on Eau-tis’ location and dive behavior.

Update 12/26/2018:
After 84 days of silence from Eau-tis’ tag, we started receiving location information again. Initially it was thought that the antenna was permanently damaged around September 21, 2018 and that no further information would be received from the turtle. However, Eau-tis gave us a holiday treat when the tag started sending information again on December 20, 2018.

Based on diagnostic data from the tag it was determined that there must have been something caught around the antenna that prevented the tag from sending strong signals during that time. We are delighted to be getting updated information from Eau-tis 134 days after the turtle’s release. Eau-tis is currently located near Melbourne, Florida.

Update 8/24/2018:
Eau-tis has swam father north and is now just off the coast of Fort Pierce, Florida. The turtle is also a bit father offshore in deeper waters.

Update 8/17/2018:
Since being released, Eau-tis swam north and is now right around the Palm Beach Inlet. Although some of the points appear to be on land, this is just a result of the normal error in the satellite readings. Based on the high accuracy points, it appears that Eau-tis is staying very close to the shoreline which is why some of the less accurate points appear to place the turtle on land.

Update 8/14/2018:
Eau-tis was successfully released from the beach in front of Eau Palm Beach Resort & Spa.