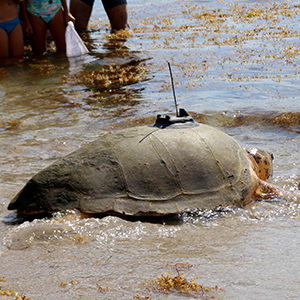 Eau-pehlia is a sub-adult loggerhead turtle that was brought to us by Inwater Research Group who monitors the intake canal of FPL’s St. Lucie Site. The turtle arrived at LMC’s Sea Turtle Hospital on March 2, 2019 underweight and in overall poor health due to chronic debilitation.

Eau-pehlia is named for Eau Palm Beach Resort & Spa. With a name like Eau (pronounced “O” – French for water) and the Atlantic on their door step, Eau Palm Beach Resort & Spa is committed to ocean conservation and has dedicated their support to further LMC’s mission. Thank you Eau Palm Beach for your generous support and providing us the opportunity to track Eau-phelia’s movements post-release by providing funding for the Wildlife Computer’s satellite transmitter that was affixed to Eau-phelia’s carapace (shell) prior to release.

Final Update 10/1/2019:
Eau-phelia’s last transmission was on August 29, 2019 after just 59 days of tracking. The turtle was located in the Bahamas when her last signal was received.

Update 9/30/2019:
We haven’t received any signals from Eau-phelia’s tag in the past month. Her last transmission was on August 29, 2019 as Hurricane Dorian approached the Bahamas.

Update 9/16/2019:
Eau-phelia was just north of Nassau, Bahamas on August 29, 2019 when her signal was lost. This is around the time that Hurricane Dorian passed over the Bahamas. Most evidence suggests that turtles ride out large storms like Dorian just fine, so our hunch is that it was just coincidental timing that we lost signal from the turtle at the same time as the storm’s arrival. Biologists will continue to monitor the tag to see if signals come back online in the near future.

Update 8/26/2019:
Eau-phelia swam south and is now in Bahamian waters. The turtle is still in deeper waters, but may be heading for a foraging ground in the area. Stay tuned to see where this turtle ends up.

Update 8/22/2019:
Eau-phelia looks as though she may head towards the Bahamas, although she has taken an interesting path, so we will be watching her closely to see what she decides to do next. Eau-phelia is now out past the continental shelf making deep dives.

Update 8/19/2019:
Eau-phelia moved away from the inlet on August 12, 2019, traveling north in the Gulf Stream for three days. The turtle got as far north as St. Augustine before turning southeast on August 15, 2019. Eau-phelia is now well offshore of Melbourne, Florida along the continental shelf.

Update 8/9/2019:
Eau-phelia has been staying just off the coast of Port Salerno, Florida. The turtle is close to the St. Lucie Inlet where there is a lot of boat traffic. This is a good reminder for our boaters to be aware while they are out on the water.

Update 7/25/2019:
Eau-phelia has continued to swim south along the coast and is now located off of Port Salerno, Florida.

Update 7/2/2019:
Eau-phelia, a sub-adult loggerhead turtle, was returned to its ocean home in a private release at Eau Palm Beach Resort & Spa today.