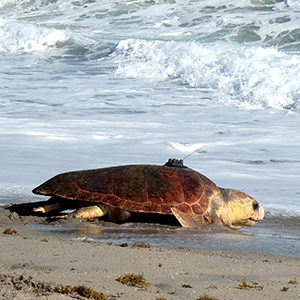 Gavin is a large sub-adult male loggerhead turtle that was found stranded in the Intracoastal Waterway at DuBois Park in Jupiter, Florida on February 2, 2018. The turtle was externally hooked on the right front flipper and was also chronic debilitated. The turtle was treated with parenteral nutrition, fluids, antibiotics, iron, and vitamins during his ten month stay at the Sea Turtle Hospital at Loggerhead Marinelife Center. On December 13, 2018 Gavin was released from Juno Beach, Florida with a Wildlife Computer’s satellite transmitter affixed to his carapace. This tracker will allow biologists to follow Gavin’s movements and behavior post-release.

Tail length is the only visible feature that can be used to distinguish male sea turtles from female sea turtles and it can only be used as an identifying feature when sea turtles are fully grown. Adult male turtles have a tail that extends past the end of the turtle’s carapace, or shell, while female turtles have a short tail that is mostly hidden by their carapace. Based on the length of his carapace, Gavin is classified as a sub-adult loggerhead. However, Gavin’s tail already extends past the end of his shell, identifying him as a male sea turtle.

Final Update 10/23/2019:
We received the last transmission from Gavin on September 19, 2019 after 280 days of tracking. Gavin was located off the coast of the Canaveral National Seashore.

Update 9/30/2019:
The last transmission we have received from Gavin was from September 19, 2019. Gavin was still in the same location off the coast of the Canaveral National Seashore when transmissions stopped. We are hopeful that Gavin’s tag will come back online.

Update 9/16/2019:
Gavin remains in the same location, off the coast of the Canaveral National Seashore.

Update 8/26/2019:
Gavin is still in the same location, off the coast of the Canaveral National Seashore.

Update 8/9/2019:
Gavin is still located off of Titusville, Florida.

Update 7/3/2019:
Gavin surprised us on June 25 when his tag started transmitting again. We hadn’t gotten any location information from Gavin’s tag since May 14, but were delighted to see his tag start sending information again. Tags can stop and start sending signals for a variety of reasons. Our best guess is that the tag was fouled with algae that prevented the transmissions for a while. Gavin is still located off of Titusville, Florida.

Final Update 6/7/2019:
Unfortunately, we lost signal from Gavin’s satellite transmitter on May 14, 2019 after 109 days of tracking. Gavin was still located off the coast of Titusville, Florida when signals stopped.

Update 4/1/2019:
Gavin has stuck around the Canaveral National Seashore for the past three weeks.

Update 3/11/2019:
Gavin has continued to travel north and is now off the coast of Titusville, Florida.

Update 2/25/2019:
After spending the past month off the coast of the south end of Jupiter Island, in the past couple of days, Gavin has started traveling north along the coast and is currently located off of Vero Beach.

Update 1/30/2019:
Gavin started traveling south on January 25, 2019 and is now located off the coast of Tequesta, Florida, just a few of miles north of his release location. Gavin’s movements are likely in response to the dropping water temperatures. We will keep a close eye on Gavin to see where he goes.

Update 1/23/2019:
Gavin has been staying around the Fort Pierce Inlet. The amount of boat traffic associated with inlets is always a concern as boat strikes are the second leading cause of sea turtles ending up in The Sea Turtle Hospital at LMC. With a grant awarded by the Florida Sea Turtle Grants Program, LMC has established the Voluntary Speed Reduction Zone Project (VSRZ). In collaboration with the Archie Carr Center for Sea Turtle Research at the University of Florida and the FrameWorks Institute, the VSRZ aims to decrease harmful interactions between sea turtles and boaters through educational outreach.

Update 1/9/2019:
Although Gavin is relatively close to shore, the Gulf Stream hugs the coastline in Southeastern Florida. Therefore, Gavin can stay close to shore while also staying in warm waters.

Update 12/26/2018:
Gavin is still located around Fort Pierce, Florida and continues to stay close to shore.

Update 12/18/2018:
Since Gavin’s release, he has traveled north and is currently off the coast of Fort Pierce, Florida. Gavin is staying close to shore in 78⁰F water.