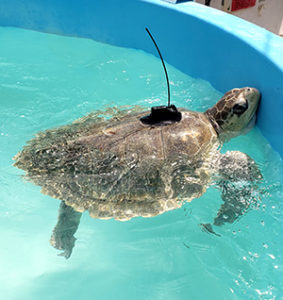 Expected Lifespan of Tag: A couple of months

Harry is a juvenile olive ridley sea turtle that was found stranded 6 miles offshore of Harry Harris Park in Tavernier, Florida Keys in early February. The turtle was found entangled in a ghost fishing net that caused constriction injuries to all four flippers. Unfortunately, derelict fishing gear is the biggest threat that olive ridley sea turtles face today, and Harry is just one of the many cases we see of turtle entanglement.

Thankfully, our friends and colleagues at The Turtle Hospital in Marathon were able to respond and have been treating Harry at their facility for the past six months. The turtle is now feisty and healthy and ready to be released back into the wild. This species is typically found in the southern Atlantic Ocean with nesting grounds in South America and Africa. Due to the rare occurrence of the species in Florida, this turtle provided the perfect opportunity for scientists to GPS track the turtle's movements to answer questions about their migration patterns. Loggerhead Marinelife Center is the only facility in the state of Florida permitted to tag olive ridley sea turtles. Our Research Data Manager, Sarah Hirsch, who specializes in sea turtle tracking, headed down to The Florida Keys to attach Harry's tracking device. We look forward to seeing where Harry heads! We are so glad we could collaborate on this important research with The Turtle Hospital in Marathon!

Final Update 4/02/2020
Harry’s satellite transmitter stopped sending signals on March 1, 2020. Harry was still located in the same area off the Florida Keys when the last transmission was sent. LMC is grateful to The Turtle Hospital in Marathon, Florida for allowing us to track their rehabilitated olive ridley sea turtle in order to learn more about this species not commonly found in Florida waters.

Update 11/25/2019
Harry still remains in the area off of Key West, Florida, just one mile from the turtle’s original release location.

Update 9/30/2019
Harry still hasn’t moved much since release. The turtle is now close to the release location, in shallow waters off of Key West.

Update 9/16/2019
Harry hasn’t traveled far since release. The turtle is approximately half way between Key West and the Marquesas Keys.

Update 8/26/2019
Harry hasn’t gone far since the turtle’s release. The turtle is currently in 5 meters of water off the coast of Key West, Florida.

Update 8/22/2019
Harry was released from Higgs Beach in Key West in a public release conducted by our friends and colleagues at The Turtle Hospital in Marathon, Florida. Thanks to The Turtle Hospital for their great work in caring for Harry and allowing us to attach a satellite transmitter to the turtle prior to release.