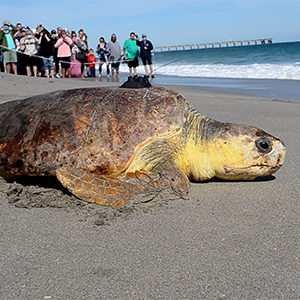 Honda’s Background Info:
Honda is an adult male loggerhead sea turtle that was found in the St. Lucie Power Plant intake canal on April 7, 2018. Upon admission to The Sea Turtle Hospital at Loggerhead Marinelife Center, Honda was underweight and had an active infection. The turtle gradually made progress and was eventually medically cleared for release. Honda was released from Juno Beach on November 28, 2018 with a Wildlife Computers’ satellite transmitter. 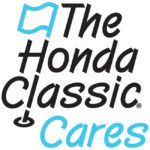 Final Update 4/1/2019:
On March 17, 2019 Honda started swimming south along the coast. Unfortunately, one day later his transmissions ceased. He was offshore of Sebastian, Florida when we received the last signal from Honda.

Update 2/25/2019:
Since the last update, Honda has moved slightly south and is now off the coast of Melbourne, Florida.

Update 1/30/2019:
Honda started traveling south on January 27, 2019 and is now located off the coast of Cocoa Beach, Florida. Honda’s movements are likely in response to the dropping water temperatures. We will keep a close eye on Honda to see where he goes now.

Update 1/9/2019:
Honda is still located off the Daytona Beach coast.

Update 12/26/2018:
Honda continued to travel north and is currently off the coast of Daytona Beach, Florida in warm Gulf Stream waters.

Update 12/18/2018:
After a brief stay off the coast of Melbourne, Florida, Honda has traveled north since his last update and is now as far north as the Canaveral National Seashore.

Update 12/10/2018:
Honda has continued to travel north and is now just offshore of Melbourne, Florida. Honda is in 95 feet of water that is currently 76°F.

Update 11/29/2018:
Honda was released off of Juno Beach on November 28, 2018. Since his release yesterday, Honda has traveled approximately 5.5 miles and is currently just off-shore of Carlin Park.  See photos and videos from his release on our Facebook page.