Click here for the most recent map of TFD's location >> 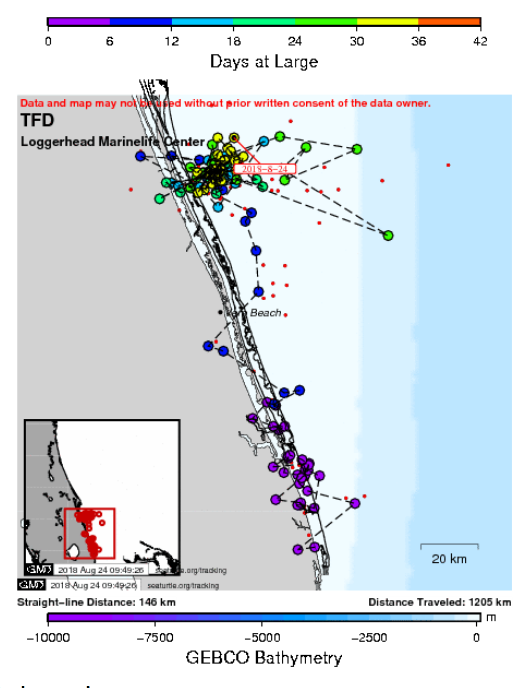 TFD is an adult male loggerhead sea turtle that was found in the St. Lucie Power Plant intake canal by Inwater Research biologists on March 18, 2018. The turtle was in poor condition due to starvation and anemia. TFD was also missing a portion of the right rear flipper due to an old, healed injury. Upon admission to the Sea Turtle Hospital at LMC, the turtle was started on total parenteral nutrition supplementations until the turtle began eating on its own.

After four months, TFD’s anemia had resolved and the turtle was eating well and putting on weight. LMC’s veterinarian cleared the turtle for release. In prep for TFD’s release, the turtle was outfitted with a Wildlife Computers SPLASH satellite transmitter. This transmitter will allow LMC biologists to track the turtle’s movements post-release to ensure successful rehabilitation. Biologists have little opportunity to study male sea turtles because they spend their entire lives at sea. Therefore, the data collected from TFD’s satellite transmitter is also important for biologists to learn more about male sea turtle biology.

Final Update 9/21/2018:
Approximately two months after his release, we lost transmissions from TFD on September 21, 2018. TFD’s last location placed the turtle offshore of Melbourne Beach, Florida in 70 feet of water.

Update 8/17/2018: TFD moved back closer to shore and hasn’t left the area off of Melbourne Beach, Florida.

Update 8/14/2018: TFD is still off of Melbourne Beach. In the past two days, TFD has moved a little further offshore which may indicate the turtle is about to begin his migration to his foraging grounds. We will keep a close eye on TFD to see what he does.

Update 8/06/2018: TFD is still located just offshore of Melbourne Beach, Florida. The turtle has been in this same approximate location since July 27th. The data indicates that the turtle is behaving normally.

Update 8/03/2018: TFD hasn’t moved much in the past couple of days. The turtle is still offshore of Melbourne Beach, Florida.

Update 7/30/2018: TFD has continued to swim north and is now just off the coast of Melbourne, Florida. The turtle is in 73 feet of water and is making shallow dives as well as dives to the bottom of the ocean.

Update 7/26/2018: TFD has continued to swim north along the coast and is currently off the coast of Vero Beach, FL in 60 feet of water.

Update 7/22/2018: Since his release TFD swam north along the coast. He reached the St. Lucie inlet before turning around. TFD is currently off the coast of Hobe Sound Beach in 44 foot deep water.

Update 7/19/2018: TFD was successfully released from Juno Beach today after rehabilitation at LMC.