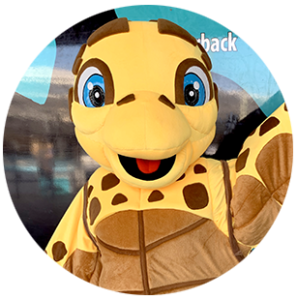 Pip’s life began when a female sea turtle dug a nest and laid her eggs on Juno Beach, Florida. Pip’s mother was a dedicated sea turtle who laid her nest high up on the beach to prevent erosion from rough seas. She returned to the ocean after carefully placing her eggs in the nest and covering them up with sand. The eggs incubated in the nest for 53 days before they hatched. Many of Pip’s siblings made it to the ocean, and eventually to the floating sargassum beds several miles offshore, where they would spend many years before venturing out on their own. But unfortunately, Pip was disoriented on the beach due to lights shining from a nearby building.

Sea turtles crawl in the direction of the brightest light and can become disoriented when lights are on near the beach. Pip thought the ocean was west of where he emerged but he was wrong and wound up in the dune vegetation instead of the ocean. Pip became exhausted from crawling around on the beach and decided to take a break from his attempts to find his ocean home. Later in the morning, a kind beach walker found Pip near the dunes and carefully placed him in a container with damp sand to bring the hatchling to the Sea Turtle Hospital at Loggerhead Marinelife Center (LMC).

Upon arrival, Pip received fluids at the Veterinary Hospital from LMC’s rehabilitation team. The little hatchlings swimming abilities were tested and hospital staff decided Pip was a strong swimmer, regardless of his challenging start at life. Pip was then placed in the hospitals outdoor hatchling tank with other hatchlings. From Pip’s first day in the hatchling tank he was a celebrity and guests snapped many photos of this energetic and playful sea turtle.

After some time, it was decided that all of LMC hatchlings were strong enough to go back to their ocean home. Pip suddenly felt very sad at the thought of not being able to share his knowledge of ocean conservation with LMC guests. So, Pip decided to stay behind, as an educational mascot, to educate humans on what they can do to help save sea turtles and their ocean home. One day, Pip will return to his ocean home, but in the meantime keep an eye out for this friendly and playful sea turtle mascot at the Loggerhead Marinelife Center.
So, if you see Pip around the Center, stop and say hello! Pip loves a high flipper five or low flipper five, flipper bumps and especially a hug from guests. So, don’t be shy when Pip is around. He loves to take pictures with guests, for that special selfie moment.

Pip, welcome to your new home, away from home!