Hatchlings that come to the Loggerhead Marinelife Center did not make it out to the open ocean when they hatched. This is caused by multiple factors. Some of our turtles were simply too weak to make it to the ocean or beyond the point of the wave break. Others were attacked by fire ants or other local wildlife, or some go in the wrong direction. Rather than go towards the ocean (which is the brightest, lowest horizon) they head towards the dunes and road because of lights coming from that direction. Our Hatchlings are held here for about 1-2 weeks. When the Hatchlings are ready for release, they are taken by boat to the Sargassum patches about 10-15 miles out in the ocean.

11/01/2017 – We released most hatchlings and wash backs last week. We are still getting a few new arrivals, but is has slowed down considerably.

10/04/2017 – We are continuing to receive multiple hatchlings and post-hatchlings daily. Our current post-hatchling count is 19 and we have roughly 200 hatchlings. We are working with the FWC to safely release these turtles in the near future.

09/27/2017 – We are working with he FWC to find sargassum and calm seas to release the 200+ hatchlings/post hatchings we have on campus.

09/17/2017 – Our patients have returned home! We are so thankful for the Georgia Aquarium for taking in our patients during this storm.

09/14/2017 – We received over 200 hatchlings due to Hurricane Irma and they were all released off shore today!

09/07/2017 – All of our sea turtle patients including 40 hatchlings have evacuated to the Georgia Aquarium due to Hurricane Irma. They will remain there with a member of our staff until it is safe to return. For all of our preparation for Hurricane Irma visit HERE.

08/16/2017 – Hatchlings were released 6.5 mile off shore with the help of Jupiter Dive Center. We have already started receiving new hatchlings.

08/10/2017 – A boat released was planned but was canceled due to a lack of sargassum in the Gulf Stream. we will continue to monitor the sargassum situation and release these hatchlings as soon as possible. 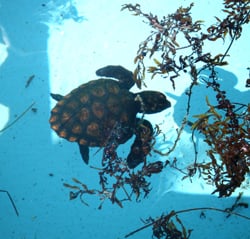 Post Hatchling refers to the size classification given to hatchlings when they reach a straight maximum length of 5cm.  Many of these turtles come to us during storms or times of rough surf and are unable to swim out past the break after coming close to shore.  Often all they need is a week or so of rest and good nutrition to be able to return to the ocean and continue their journey through life.

WASHBACKS: These turtles are post hatchling “washbacks”. This means that they are turtles who were too weak or debilitated to fight the strong currents and wash back ashore. These are turtles that are usually a few days to a few weeks old, which is considered post hatchling size (Larger than 5 cm.). Any turtle that is a post hatchling or larger must be admitted and documented as a patient at our facility. The small white dots on their shells are identifying markers. 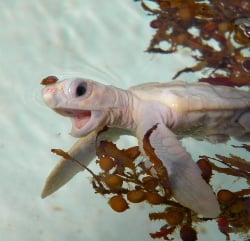 During sea turtle nesting season we occasionally encounter leucistic (loo-sis-tic) hatchlings, which appear white or cream colored. This pigmentation defect is caused by the reduction of all pigment production in the body and can affect the whole body or just portions of it. This condition is often confused with albinism, which is caused by a lack of functioning melanin producing cells.  Albinism affects the entire body, including the eyes, which will appear pink.  With leucism, the eye color will be normal.

Leucism is a genetic mutation that is not compatible with the successful continuation of the species. This and other genetic mutations create anomalies, and the affected individuals are not well suited for survival.  Perpetuation of these traits will weaken the species overall.  Without the necessary pigmentation these individuals cannot camouflage in the sargassum, during their early years.  This actually attracts predators, thereby putting these turtles as well as normal healthy ones nearby at risk.

The lack of protective melanin means this turtle will be prone to UV sun damage, painful burning, and the development of cancer.   This makes them poor candidates to remain in captivity.  In addition, the educational value of keeping a genetic mutant is poor, as they do not accurately represent the species.